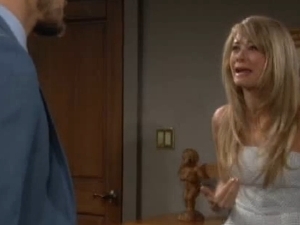 There was lots of drama, some funny bits, and a Bikini Bar bash this week on “B&B.” Thoughts:

Why didn’t you come to me?
Hope’s reaction to Liam’s announcement that he had in fact been in Paris looking right at her, was genuine anguish. Well done. The trouble with the whole thing remains that we really don’t know which guy Hope truly wants since her words and actions often say vastly different things, and it’s all gone on so long that we stopped caring eons ago. As for Ivy and Ally keeping Wyatt busy talking while Liam cornered Hope in the bedroom, Wyatt should have smelled a rat the minute Ally was nice to him!

Talent gone.
It was a little surprising that Brooke’s ultra-sensitive Ridge radar didn’t let her know that something was wrong with him before Deacon spilled the beans. Now that she knows, she is all about the connection – when Ridge is hurting, she hurts too. It will be interesting to see if Brooke will help him get his talent back, or if it will be someone else this time. Either way, I’m betting it won’t be Katie.

Rocking and rolling.
Wyatt’s love for Hope is so evident in how he looks at her and talks to her, it’s too bad she always seems to stop short of returning the sentiment wholeheartedly. How funny was it that they made Wyatt allergic to the cat she adopted with Liam? Haha!

Hello kitty.
Wyatt and Liam had a couple clashes following the reveal that Liam had been in Paris. The first, in Brooke’s bedroom, had some great back-and-forth dialogue that really brought up some interesting points, such as Liam’s remark about Wyatt ‘winning’ and whether or not they viewed it as a competition, and Wyatt pointing out to Liam that things always happen to him, whereas Wyatt is more about making things happen (more like Bill). They’re brothers, but different. The second clash was over Wyatt trying to return Hope’s kitty to Liam, and ended up with Liam watching Wyatt get his ass kicked by none other than Bob Barker. So funny!

Make your move.
When Deacon first arrived it seemed he and Quinn were basically painted with the same brush, but as the weeks have passed it's become more clear that Deacon and Quinn, though working together, are very different. Beer-swilling Deacon has been known to be crooked and an opportunist, but is certainly not a psycho like Quinn. Deacon seems to be sincere about wanting to be a family with Brooke and Hope. His most recent visit to Brooke's involved some teasing about Hope making her a grandmother (even though she already is one) and a heartfelt speech and kiss that was pretty convincing. What do you think? Vote in Soaps.com's B&B Poll: Is Deacon looking for love or money?

Bill Spencer doesn't grovel.
Quinn may be a lot of things, but she's not wrong about this - Bill's groveling is out of character and is getting old.

Ivy's incident.
It's been absolutely classic "B&B" how Ivy's story has evolved and changed with each re-telling; kind of like that campfire game, Telephone. First she fell into the Seine and was clumsy, then she was bumped into the Seine but didn't see by whom, then it was more like she was pushed into the Seine - by a woman. Incredible! So basically it's only a matter of time before Ivy fully realizes it was Quinn who knocked her into the river. The question then, of course, will be whether or not she reveals this to Liam and risks him reuniting with Hope.

Forrester Creations gang.
Well, it almost seems like Ally has let go of the idea of Hope and Liam to root for Team Ivy. Ivy and Liam were pretty cute together at the Bikini party. One of my favorite moments this week was Carter talking to Oliver about Maya and calling her a mess. So funny...and true. What's happened to that girl? It looks like she hasn't given up on the idea of stealing Rick away from Caroline. Yike. Given that he's married and, as mentioned in last week's blog, gold-digger Maya isn’t as appealing, it will be interesting to see if she gets anywhere.