Wild Bill.
Satisfied that Ridge will never remember the truth about the helicopter incident, Bill's riding his high horse again, being nasty to the minions at Spencer and pushing for Brooke to marry him soon. Uh oh. I like Bill and Brooke together, but something tells me this is going to get ugly...

Myrna's got an agenda.
Oh, that Caroline's a live wire. While I don't love the baby-talk and airhead bits, she makes up for it by being sharp, funny, and driven. Not only has she not forgotten Maya hitting on her husband, but she also realizes there is a lot more to Maya throwing Oliver under the bus than she claims. While keeping one eye on her rival, Caroline has the other on Ridge's designing job. For real! She and Rick could be a very formidable force together given the opportunity. Watch out, Ridge.

Great fortune.
It's very intriguing that Wyatt was left the Hope Diamond, and a mysterious flashdrive, by Ricardo. What can this mean? 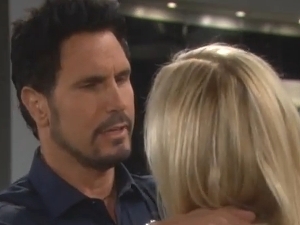 The Quinn storyline blew up this week and there were lots of other happenings to follow. Thoughts:

Let her go.
Well we got our answer to last week’s question of where they will go next with Quinn’s character. As Bill said, “The looney bin.” The really compelling portion of this tale was the story coming out of what it was like for Wyatt growing up. Who didn’t feel for him? Also fun was the ‘wink, wink, nudge, nudge’ of Deacon scoring points by having helped to save Liam’s life – much to Bill’s chagrin. Loved it.

New beginning.
In the aftermath of Wyatt saving Liam from Quinn, the two decided to forge a new path as brothers. There’s no question there were some ‘feelgood’ moments involved here, but Wyatt agreeing to be Liam’s best man when he marries the woman Wyatt loves was a step too far into the sugary-sweet zone for me. Come on.

Memory holes.
It was a heart-warming return to Forrester Creations for Ridge, who later discovered he could no longer put his design ideas down on paper. He shed a single tear a la Brooke, and then headed for home to take his frustrations out on his sketchbook. Katie found him there and insisted that when his memories returned, he would once again be able to draw. Something tells me this is exactly how it will go. Ridge was into some heavy flashbacks by week’s end. It’s looking like Justin’s concerns about winding up in the slammer might not be so far-fetched after all! What do you think? Vote in Soaps.com’s B&B Poll: Should Justin and Bill go to jail?

The Bold And The Beautiful Spoiler Video: Game-Changer

The Bold And The Beautiful Saturday Teaser Poll: Help