Convict.
After Brooke spent time firmly establishing with Bill that she didn't consider his romp with Quinn to be cheating, she was stunned to find Deacon at her door. I'm not entirely sure why she was surprised given that she knew he was in town. He made his case for being a belated father figure to Hope and Brooke told him to forget it. Bill appeared and the two bad boys sparred verbally until Deacon was kicked to the curb. After Hope showed up and declared her intention to have a relationship with her father, Brooke was suddenly on board with it. Go figure. Do you think Deacon deserves a chance to be a father to Hope? Vote in Soaps.com's B&B Poll: Deacon and Hope.

Capable of murder?
Apparently, Quinn just may be capable of murder, and Deacon, among others are beginning to figure that out. How great was it that she made a life-size Spencer sword in her dungeon/warehouse? Hehe! Who else felt bad for Wyatt this week? His scenes in the bar with Hope were heartfelt and his regret over his mother's actions at Liam's house was palpable. Loved the scenes with one person after another confronting Quinn and denying and not wavering from her stance one itty bit. Crazy! The week ended with her standing over Liam with her sword pressed into his neck. The first question in my mind was who would show up to halt the proceedings? The second was where do they go with Quinn after this?

Happy Fourth of July to the American readers, and here's hoping the Canadian readers enjoyed their Canada Day earlier this week!

Watch Soaps.com's Daytime Emmy Interview with Katherine Kelly Lang and find out who she was talking about when she said, "We're all going to get crazy." 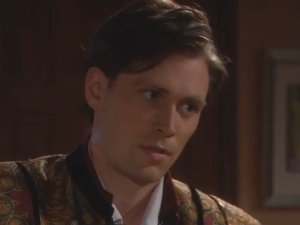 Cannot be trusted.
Oh, the scenes with Caroline, Maya, and Rick were so good. Maya tried to deflect and distract from her steam room antics with the Oliver recording, but Caroline was having none of it, and asked why Maya was up in Oliver’s business anyway, and made sure she didn’t let her forget for a minute that she’d hit on her hubby. Haha! Maya’s bought herself a load of trouble. I kind of can’t wait to see what Caroline will dish out. As discussed last week, it looks like Maya could end up with no man and no job.

Medieval fare.
Every time Pam is on, you know it’s going to be good. The Medieval Times scenes were no exception – she gets so overly-excited it’s hilarious, and she and Charlie are such a fun (and funny) pair. Oliver also had a great time at the jousting match, and later he and Ally had a little Romeo and Juliet moment, after which he found himself facing the music, or voice recording as the case may be, with Rick and Caroline. He was very convincing about having fallen in love with Ally. Strangely, I found myself wanting it to be true so that he wouldn’t get fired, and Ally wouldn’t get hurt. That said, I don’t really ‘feel’ the pairing. Ally acts so young that it’s too much like watching a teen TV series and we’ve already been there, done that with Hope.

Afraid of his own shadow.
As much of a hoot as it’s been at times, it’s kind of tough to believe that Liam would just sit back and let Quinn scare the crap out of him. Why doesn’t he report her to the police, record her threats and hold them over her head, or at the very least sic Bill on her? Bill seems to be living in a bubble as far as this storyline is concerned when he should be up to his sword necklace in it!

The Bold And The Beautiful Spoiler Video: Brooke's View

The Bold And The Beautiful Saturday Teaser Poll: Anxiety