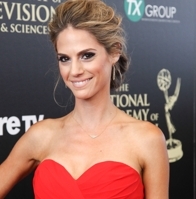 Former “The Young and the Restless” actress Kelly Kruger, who once played Mackenzie, took on a guest role during the recent “B&B” Paris remote, according to Soap Opera Digest. Kruger, who got engaged to B&B’s Darin Brooks (Wyatt) in real life while in Paris, will play a Forrester publicist named Eva. Watch for her to air on Friday August 8.

Watch Soaps.com’s Daytime Emmy Awards Interview with Katherine Kelly Lang to find out who she says planned to “get crazy.”