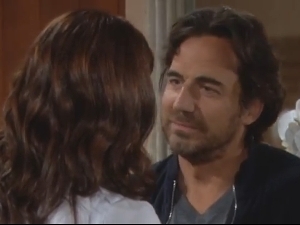 There was plenty going on with a variety of “B&B” characters this week – love that. Thoughts:

The last lemon bar.
Brooke was doing a lot of ‘watching’ Ridge and Katie together through teary, bleary eyes at the homecoming party. She may have been wanting Ridge back or may have been sad because Katie was getting more of the spotlight – maybe a bit of both, who knows? In any case, Ridge seems to be firmly on board with marrying Katie despite continuing to allude to ‘having things to figure out’.

Angry mob.
Bill’s advice to Quinn to get out of town was solid, but there was no way that was going to happen. It was odd that Wyatt came home and discussed Hope with Quinn after saying he wanted nothing more to do with her. Still looking forward to a Brooke and Quinn confrontation over the selfie business…

I’ll see what I can do.
As discussed last week, thankfully, Deacon’s not getting too sucked in by Quinn. I’m loving Deacon’s attitude toward her – totally unfazed, even amused, by the ‘crazy’. At this point he’s just sort of sitting back and assessing; feeling everyone out. Deacon’s never likely to have a stellar relationship with Hope, but it will be great fun to watch him try, and to maybe cause Brooke to have some sexual flashbacks along the way. It was too funny when he strolled into Wyatt’s beach house and mused, “I love what you’ve done with the place.” He knows how to deliver a line. Anyway, the anticipation is high to see how he’ll figure into Quinn’s mess, and presumably he has an agenda of his own as well.

Live by the sword, die by the sword.
It's too bad Liam and Quinn didn't jump each others' bones back when their rivalry was still about spirited hateful banter. Now that things have escalated to assault and death threats it's all become just a tad too disturbing and Quinn is running close to empty in the redeemable qualities department. But fun! What was she doing with that blowtorch anyway? I'm curious to see how extreme Quinn will become and where the character goes from there.

The steam room.
Oh, Maya. Hitting on Rick in the sauna was so awkward and so right out-of-the-blue too. Does she want Oliver, Rick, Carter? What's with the grumpy photos and sudden gold-digger attitude? What's going on with this girl? It seems she's on track to wind up with no man and no job.

The perfect model.
Haha, yep, Oliver is definitely right about Ally being the ideal person to tout Hope's message. If she's the perfect model, then he is the perfect boyfriend right now - willing to dress up and sit through hours of Pam and Charlie in medieval mode. That's devotion. Of course now that everything's just wonderful with Ally and Oliver, Maya has gone off the deep-end and played the incriminating recording for Caroline and Rick. I wonder if they'll let Oliver get out of that costume before they grill him. Conveniently, Thorne is in town for this reveal as well. Ack. What do you believe about Oliver and Ally? Vote in Soaps.com's B&B Poll: What are Oliver's feelings toward Ally? Vote!