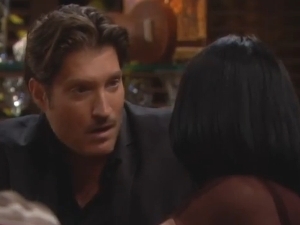 While it was amazing to have Deacon back, things got a little irksome in the ‘Ridge is alive’ storyline this week on “B&B.” Thoughts:

Satisfaction.
Many viewers got a kick out of Wyatt telling Liam that Hope would be ‘drawn back to their passion’, aka, ‘I’m better in bed than you are’. Too funny!

Spank me.
Quinn and Deacon together definitely spell trouble but there’s some debate about whether or not they should hook-up. It almost seems too predictable a route to go, but on the other hand, it would definitely be hot! Here’s hoping Deacon doesn’t get too sucked in by Quinn either – it won’t be as fun if he becomes a joke. What is your opinion on Deacon and Quinn? Vote in Soaps.com’s B&B Poll: Should Deacon and Quinn hook-up?

Your dad.
The thing with Deacon and Hope is that his edge makes her more interesting and wanting her acceptance makes him a little softer and more vulnerable. It's all good, though as mentioned in last week's blog, we hope Deacon’s entire storyline won't revolve around Hope.

So annoying!
Many of the storyline beats surrounding Ridge being found alive this week were downright irritating. For instance, his blank confused looks every time someone spoke to him or hugged him really started to drive many nuts by the time they left Abu Dhabi. Meanwhile, Hope managed to make the entire Ridge drama about herself and how it made her feel - right down to her speech at his homecoming party. Slap! And what was with Liam awkwardly fist-pumping and shouting, "Ridge is back, baby!" at Forrester Creations? Talk about uncomfortable... Speaking of which, please bring back the real Rick. That imposter spouting warm fuzzies about Ridge was just scary - let's be honest, he can't stand him! It wasn't all bad, however. It was surprising and refreshing that Ridge actually remembered his love for Katie. This was very unexpected as many thought he would be all about Brooke after his trauma. Kudos. Oh, and it made me wonder what else he remembers...look out Bill and Justin.