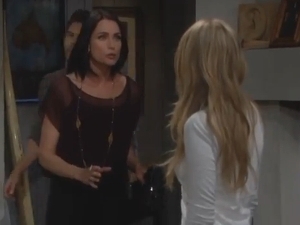 Having Liam and Hope front and center again definitely put a damper on the week’s proceedings, but with the return of Deacon Sharpe on Friday’s episode, things were looking up. Thoughts:

That woman is the devil!
You have to laugh at Pammy leading the witch hunt against Quinn considering the scary stuff she did in her heyday. It’s also kind of amusing that everyone at Forrester is gunning for Quinn because Ridge fell out of the helicopter, when it could have played out differently and they might have ended up thanking her. Quinn, for her part, refuses to take any blame for what happened to Ridge, which is both scary and entertaining.

Big bear.
Wyatt’s devastation has been palpable since Hope left him at the cabin. It’s too bad he couldn’t meet someone much more sensational and extract himself from Hope’s Bermuda Triangle of Love before he (and we!) have to suffer another twenty rounds of brother-swapping featuring head games such as ‘Guess Who?’ ‘Twenty Questions’ and the all-time favorite, ‘Stop the Wedding’.

Cuckoo crazy.
As discussed in last week’s blog, the Quinn versus Liam thing has jumped the shark, so to speak. They should have had insanely hot hate sex weeks ago.

Taking advantage.
Like Maya, I find it hard to believe that Oliver is genuinely interested in Ally, and no, it's not very appealing to watch them together. Can this guy please get in a sexy relationship with a grown woman? He'll need to be careful dumping Ally though, she still had the crazy eyes when she confronted Quinn in the corridor. Maya, meanwhile, is also acting off the wall and Carter just needs to wise up. She's been a mess since Rick dumped her.

Interference.
After Wyatt told Quinn to stay away from Hope, she went directly to Liam's to see Hope. Sigh. Not that it did her any good. Hope reiterated that the fog had cleared and she was absolutely certain her future was with Liam...for the umpteenth time...again...

You alright lady?
Whee! Deacon Sharpe is back. Even Quinn was rendered speechless to discover that the barfly who had sidled up beside her was none other than Hope Logan's bio-dad. "Know her? Honey, I'm her daddy." Oh what sleazy deliciousness! Fingers and toes crossed Deacon's storyline doesn't end up being entirely about Hope. Are you excited to see Deacon return? Vote in Soaps.com's B&B Poll: Deacon Sharpe is Back.