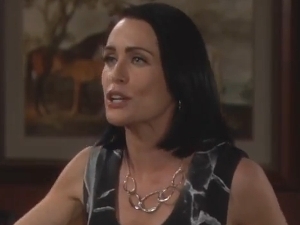 There was plenty of gasp-worthy drama this week on “B&B,” which is what it’s all about. Bravo! Thoughts:

Beach blanket bingo.
From the moment Ridge appeared and called out “Logan!” it was non-stop drama on the beach in Abu Dhabi. Ridge didn’t quite get the reaction he’d hoped for from Brooke when he revealed the incriminating photo. As speculated in last week’s blog, the selfie wasn’t a deal breaker for Brooke. It did, however, cause enough of a diversion for Ridge to sucker punch Bill and grab a dazed Brooke and drag her up the beach to where a helicopter conveniently landed. Unbeknownst to Ridge, who assumed it was the one he’d arranged for, it was actually Justin arriving to pick up Bill and Brooke after their ceremony. Ridge stuffed Brooke inside and clambered in behind her while she yammered about her ruined wedding. Was anyone else furious at Brooke by this point for acting so helpless? Hehe. Next, Bill, who had dusted himself off and was now taking in the scene unfolding before him, gave Justin the nod to take off and followed up with orders to ‘cool’ Ridge off…in the Persian Gulf. Who wasn’t hooting out loud when they realized the pilot was Justin? So soapy! Oh and that shot they keep showing of Ridge falling with the water behind him is priceless. Great stuff!

Evil and delusional.
It was interesting that Katie used the phrase ‘evil and delusional’ to describe Quinn when they were arguing. Some would say that Katie qualifies as delusional herself for not having a major issue with Ridge flying across the world in pursuit of Brooke. Anyway, the confrontation between Quinn and Katie was a delight to watch. The match went to Katie who smugly slung one hard truth after another in Quinn’s direction.

Change of heart.
Sometimes it seems like Eric is getting more than a bit dotty in his elder years. His opinions change so radically in the space of a short time, it makes one wonder if he even remembers the stance he so firmly took the week before on any given issue. In this instance, he did a complete turnaround on the pairing of Katie and Ridge - even showing up with a completed wedding gown - just in time to hold Katie's hand through the disappearing Ridge crisis and accompany her to Abu Dhabi.

Maximum damage.
The Liam and Quinn clashes, which were previously epically fun, got too dragged out this time around. The yelling and insulting went on repetitively for days which sucked the enjoyment out of it. Who could fault Wyatt for punching Liam in the end - he just wouldn't shut up! Do you think Quinn is responsible for Ridge's misfortune? Vote in Soaps.com's B&B Poll: Is Quinn to blame for Ridge's fall?

That's who you are?
It's beyond me why Hope would be so outraged at Wyatt punching Liam, when Liam punched Wyatt previously and she didn't get nearly so upset or judgmental, but of course that was when they were fighting over her. So it appears that Hope has made her choice. She and Liam will likely start wedding planning sometime tomorrow. Mr. and Mrs. Self-Righteous. Yech.

We'll find him.
The drama was decidedly tenser in Abu Dhabi at week's end as there was still no word on Ridge. The best was part was watching Bill trying to be reassuring to the womenfolk as he simultaneously appeared to be crapping himself. Gotta' love it.