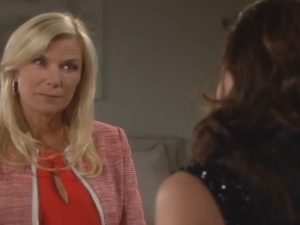 This week largely centered on the Bill/Brooke/Ridge/Katie quadrangle, with a little crazy Quinn thrown in for good measure. Thoughts:

Foolish.
Well it’s getting tough to tell who has real feelings for whom, and who just wants to get back at someone else in the quadrangle. They have all exhibited actions that could be seen as suspect. Katie and Brooke throwing their engagements up to each other, the timing of Ridge’s proposal, the timing of Bill’s proposal, Ridge being way too into Brooke’s business, Brooke rushing to tell Ridge she’s engaged, the Bill/Ridge fistfight, etc. So messy, yet so soapy. Now there’s another wedding to stop – classic “B&B.” After last week’s discussion about the Ridge and Bill rivalry, Soaps.com readers voted in favor of Bill to win Brooke’s heart, so here’s hoping things go off with a hitch.

Steamed.
So why did Liam threaten to press charges the next time Quinn does something to him? Why not this time? Jeeze.

Pool party.
The Hope triangle needs to end yesterday. That said, I’ll miss Wyatt winding up Liam – he’s so good at it and Liam’s such an easy target!

Black leather.
Quinn’s early wedding present to Bill prompted him to call Alison to crank up the air conditioning – so funny! She did talk some sense about Brooke, but of course Bill wasn’t about to listen and he’s too infatuated with Brooke to even entertain the idea that all might not be perfect. Quinn may not be playing with a full deck, but she’s still got at least one card to play – the dreaded selfie.

The camera doesn't lie.
Obviously, Quinn is going to make sure that Brooke sees that selfie of her and Bill in hopes of sabotaging their wedding. What is still puzzling is why it's a factor. Quinn and Bill got busy when he and Brooke were split up. The only reason it could be a potential deal-breaker is that he hasn't been forthcoming about it, but who is Brooke to judge anyway given her track record? What do you think about the 'affair'? Let us know by voting in Soaps.com's B&B Poll: Did Bill cheat with Quinn?

Spencer pride.
While it was fun to see Ridge practically have smoke coming out of his ears at the sight of the tiny sword necklace RJ was sporting, it took me right out of the moment when RJ referred to Bill as Mr. Spencer. Umm, RJ does realize that 'Mr. Spencer' is his Uncle Bill, right? The one who was married to his Aunt Katie for years and years? Weird...