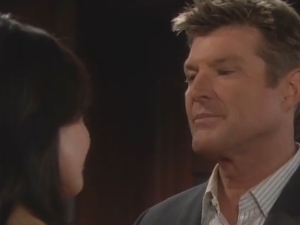 It was an emotional week on “B&B,” with a bit of fun thrown in at the end. Thoughts:

Dizzy Donna.
One had to laugh when the week kicked off with Donna over at Katie’s offering up congratulations on her engagement to Ridge. Donna’s head must be spinning trying to keep score on her sisters’ love lives. It’s funny she doesn’t have a romantic life of her own – the stuff with her, Eric, and Quinn was dropped like a hot potato!

I know this is a shock.
Well, Thorne sure changed his tune quickly once he got a load of Ally going ballistic over his reunion with Taylor. He went from ‘Ally will just have to accept this’ to ‘I’ll return to the bachelor life in the FC basement’ in mere minutes.

Axe-wielding Ally.
Likewise, Ally went from wanting to kill Taylor to hugging and forgiveness in a suspiciously short amount of time. It was like Oliver put her in a trance or something. What ensued were some very emotional scenes with heart-tugging flashbacks, however, and it led to a very satisfying conclusion for everyone. Warm fuzzies all around.

Who is the clown?
Ridge versus Bill makes for an excellent rivalry with some epic one-liners. Just when you think Bill is the most arrogant thing you've ever seen, Ridge comes along and decides he's going to dictate to everyone how they're going to live their lives. Oh, the egos! Bill actually came over like the more mature of the two, which could only mean one thing - he is truly happy with Brooke and isn't at all bothered by Katie moving on. Since Ridge's actions reek of him not being past his feelings for Brooke, this doesn't look good for Katie moving forward. Anyway, in the Bill versus Ridge sweepstakes, Bill seemed to win the week, what with his genuine happiness and romantic plans to sweep Brooke away to marry her. Ridge's grunting disapproval left something to be desired. Where do you stand? Vote in Soaps.com's B&B Poll: Team Ridge or Team Bill.

Custody of the cat.
One just has to laugh... Who, indeed, will get custody of Hope's cat? Hope still hasn't chosen between the brothers of course, mainly because this storyline was absent most of the week (not complaining!), and Brooke's wise counsel was for her to take her time - it's great to have two guys fighting over you!

Too hot.
Liam's in another pinch thanks to Quinn, who seems to be ready to quite literally cook his goose! For a minute it seemed she might go in there with him. Hehe.

Read Soaps.com's Grey's Anatomy Recap: Fear (Of The Unknown)​ to find out how Cristina said goodbye to Grey-Sloan Memorial.