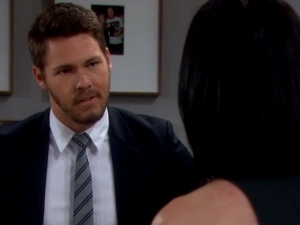 It was a very busy week for “B&B,” with clashes and tears galore. Thoughts:

It had to be done.
One of the best things about the Brooke/Bill/Katie/Ridge quadrangle is how emotionally-charged it can be, and also how the constant push and pull can keep viewers changing their perspective. It’s rarely been dull. The love-in between Brooke and Bill after she gave him his company back was touching, yet later in the week, the angst of her conversation with Ridge was moving also. Viewers could find themselves cheering Brooke on one minute, and rooting for Katie the next. Ridge is truly the wild card in all of this, as he’s been rather flighty – not around much – and then impulsively shows up and proposes, leaving room for doubt about his timing and true motives. Good stuff.

Weirdly vital interesting woman.
Quinn cheerfully blackmailing the behind off Bill was almost as fun to watch as her run-in with Liam. The clashes between these two are just becoming epic. Forget petting Hope’s cat, sparring with Quinn energizes the deadly dull Liam and brings him to life. They totally need to throw down and have a hate sex session on his desk one of these times. The fallout would be absolutely brilliant. So bad but so fun!

Spencerized.
It wasn’t clear exactly how Quinn thinks it’s going to help Wyatt to have Bill’s name, though it’s a nice enough gesture. It’s also odd that she thinks Wyatt having Bill’s support in the bid to win Hope is going to make any difference whatsoever. Bill lost his credibility as a parental meddler back in the Steffy days.

Get to picking.
Had to laugh at Quinn's suggestion to Hope that she 'get to picking'. Ya' think? We're all just beating our heads against the proverbial wall waiting for this chick to make up her mind about her destiny as if we even care. It's all become so ridiculous, repetitive, and boring that it's pretty much at the point where the only truly satisfying outcome would be to see her finally deign to make a choice only to discover that neither of them wants her anymore. It could happen, right? How would you like to see this end? Vote in Soaps.com's B&B Poll: Hope's choice.

You will not take my father!
It would be great if Taylor and Thorne would stay in L.A., but it sounds like they've just crossed the pond long enough to make Ally homicidal. Oliver's been pretty supportive up to this point, but it's anyone's guess how he'd react to seeing Ally in full Lizzie Borden mode. I figure either Oliver and Thorne will rush in and save Taylor from the axe-wielding crazy girl, or the magical floating head of Darla will pop up and talk her down. Yike. Here's hoping someone - anyone - insists that Ally get serious help after this.

Read Soaps.com's Grey's Anatomy Recap: Everything I Do, Nothing Seems To Turn Out Right​ to find out how Derek stunned Meredith.