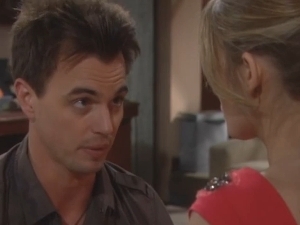 This week was a bit of a downer thanks to the refocus on Hope and her triangle-living. Thoughts:

Gum stuck to her shoe.
There aren’t too many viewers left who are swooning over Liam as a romantic hero – years of flip-flopping have destroyed his integrity. Besides, he’s kind of boring without Steffy to liven him up. Let’s face it, returning to focus on Liam and Hope’s rather over-exposed love story is more akin to picking at a scab than anything more enchanting. Regardless of which pairing you like, it’s a good bet you’re ready to have Hope choose a man and then go back-burner for a good long time. As for the premise of Hope dating two brothers simultaneously, are we supposed to find that empowering? More worrisome – since Liam invoked a ‘no sex’ policy for this ridiculous equal time plan the giggling and kissing is bound to escalate beyond acceptable limits. What might save the day is if Wyatt refuses to settle for sharing her. Vote in Soaps.com’s B&B Poll: What should Wyatt do?

Whose house?
The scenes with Bill and Liam are always comic gold and this week was no exception.

Past the comfort zone.
Maya’s interest in Oliver’s love life has definitely gone beyond the comfort zone. Carter needs to get seriously irritated and find out she and Oliver shared a kiss – that would add a little zing for his character.

He's everything.
Caroline giving advice to Ally made for a feelgood scene, but more importantly, she is the only one who knows about Oliver and Ally. This leaves one to wonder if she'll end up in a situation where she has to compromise the secret.

Flip and fly.
It was laugh out loud funny when Wyatt muttered under his breath that Ally was going to 'flip and fly' after Oliver suggested she model the bedroom line. That said, it was kind of weird that Oliver suggested this given her attitude about Hope doing it. It was almost like he was testing to see how much sway he had over her, which would be unappealing if it were true. As for the underwater shoot at the pool, those were some awkward shots - not so sure Ridge would be impressed. Where has Ridge been anyway? Ally later opened up to Oliver about her hatred for Taylor, which seemed out of the blue until we learned that Taylor is once again sleeping with Thorne - whoo hoo!

Watch a True Blood spoiler video and much more in our Primetime Dish.