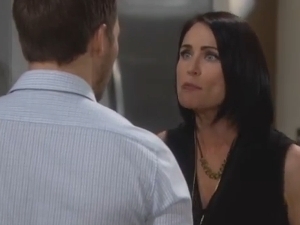 It was another solid week of “B&B,” as the Katie and Brooke feud heated up. Though Katie came out swinging, it looks as though Brooke is ready to hit back. Thoughts:

Place of business.
There were some pretty entertaining scenes with Katie and Eric, and then with Katie and Brooke after Katie confronted Eric about his efforts to push Ridge and Brooke together at work. Snippy confrontational Katie can be a little annoying, but a lot of fun, as she has a great deal of conviction once she forms an opinion. She’s good at dishing out straight talk to Brooke – there’s been a void left by Stephanie and Taylor in that department. On the opposite side of the coin is Eric, whose convictions seem to change weekly. Recently his party line is that Ridge and Brooke are the future of the company. Why wasn’t he concerned about this when Ridge was in Europe, and how on earth does he envision the company running smoothly with Ridge as CEO and Rick as president when they can’t agree on anything? Yeeps.

Out of options.
Liam kidnapping Hope to take her back to Malibu for another round of ‘we should be married by now’ had many reaching for the aspirin or the fast-forward button. If she’d been knocked up with Wyatt’s baby at least this triangle business would have been over for the time being. Or would it?

Wyatt’s lament.
Who didn’t laugh when Wyatt complained to Quinn that Liam had taken his truck, his trailer, and his girlfriend? Sounded like a country song in the making! Speaking of which, some viewers have a hankering to see plain vanilla Liam buck up and go for a round of hot hate sex with quick-tempered Quinn. Now that would be a total hoot…not to mention loaded with potentially embarrassing and hilarious complications after the fact. Would you like to see this happen? Let Soaps.com know in our B&B Poll: Should Liam and Quinn have hate sex?

Find your mojo.
Well, Justin's been a surprise this week. Clearly fed up with the goings-on at Spencer, he urged Bill to get his mojo back, and spouted mean things to Katie about her heart. Karen, meanwhile, fielded pressure from Brooke, who gives 'stand by your man' a whole new meaning, to dump Katie and reinstall Bill as CEO. Since she didn't get her way, she'll use those papers Katie signed now. Bit of an oversight on Katie's part not insisting on seeing those documents go through a shredder!

Set for life.
Nope! It's not believable that Oliver has been in the Forrester Creations orbit all of these years and suddenly now becomes insanely insecure and envious of the Forresters and Logans. "B&B" has never been afraid to have someone behave out-of-character though if it suits the story. So while Maya plays Carter a recording of Oliver casually confessing that he's using Ally for job security, Oliver's over at the Forrester pool dazzling Ally with his charms. What I want to know is if Oliver's such a cad why didn't the floating head of Darla warn her daughter? Gah.

Watch a Star-Crossed spoiler video and much more in our Primetime Dish.