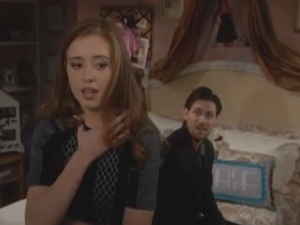 Another entertaining week of “B&B” with lots of developments. Thoughts:

Turkey legs.
While it’s amazing that viewers are finally getting to see more of Oliver, pairing him with Ally is a dubious choice. Considering we’ve just got out of the nervous, giggly, innocent girl stage with Hope – and it was highly annoying – another trip down that road isn’t exactly appealing. Additionally, the fact that Oliver keeps talking about the whole ‘not being a Forrester’ thing, could hint at him using Ally for job security since she is a Forrester. Also not appealing to have Oliver be ‘that guy’. As for the scenes in Ally’s bedroom, her hyperventilating over the kisses was cute for a minute, but not as fun as Pam showing up at the door in medieval garb all stoked to go eat turkey legs. Too funny.

Carter barter.
Maya was awfully concerned about what Oliver’s intentions toward Ally were, perhaps a tad too much for someone who is engaged to another man. It’s time for Maya to let Carter get on with his life – she’s clearly just not that into him.

Paging Steffy.
With Liam kissing Hope this week it’s officially triangle time again – ugh. Of course Hope stirred up the drama with a pregnancy scare – have these kids not heard of birth control? Seeing Liam and Wyatt butting heads with that same old recycled script on Friday’s episode just filled some with dread for what’s to come.

A really big favor.
Who else thought Quinn's second request was going to be another romp in the bedroom with Bill? It was a bit unexpected that she elected to ask for Wyatt to be made a Spencer. Given Bill's egotistical tendencies it's surprising that he didn't do that the minute he learned Wyatt was his son, but anyway, Quinn asked, and something tells me there's an ulterior motive in there somewhere.

The B&B train.
It's a relief to have Dollar Bill back in the, er, saddle again, so to speak. He's much more entertaining as a man who is commanding and virile than as a wallowing drunkard (although we could do without the stallion noises). Brooke's feminine side flourishes in his presence as well. It will be interesting to see what havoc this confident couple will wreak. With Brooke and Katie each wanting the kids under their roof it's bound to get ugly. What's your take on the matter? Vote in Soaps.com's B&B Poll: Who should RJ and Will live with?

Watch The Leftovers spoiler video and much more in our Primetime Dish.