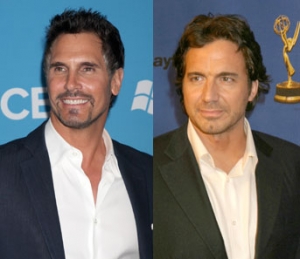 Dollar Bill’s your typical scotch drinking, rare steak-eating virile dude. He’s successful, wealthy, and apparently likes the Logan women. A lot. He’s very vocal about who his son Liam should and shouldn’t marry, but has enough to worry about in his own love life…

Dollar Bill and Ridge aren’t exactly similar creatures. Nu-Ridge is a gruffer version of the old Ridge who doesn’t have that penchant for tossing the ever present scarves over his shoulder that the original had. Instead, he has a smooth foreign accent and gravelly voice to boot. He is as manly as $Bill yet seemingly more old fashioned when it comes to courtship. While Ridge has been reciting poetry and bedding his lover who just happens to be his ex-wife Brooke’s sister, Bill has played boozy S&M games with his unbalanced ex-lover, Quinn, while putting everything out there to get Ridge’s ex-wife Brooke back. Yep. Sounds like a soap opera.

Between both men, which would you choose for yourself? Which man is hotter?

Weigh in on this DOOL Poll: Brady vs Wolverine.