The Bold And The Beautiful Poll: Love Triangles 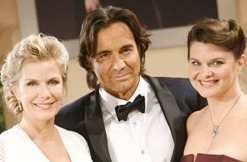 “B&B” has had its fair share of love triangles as of late. Just when the love triangle between Hope, Liam and Steffy ended, Wyatt was thrown into the mix and took up where Steffy left off. Now we have a few more added to the canvas, as well as one brewing and another that could very well resume. If it were up to you which triangle would you put an end to immediately? Is there one in the making you have no interest in seeing furthered or one you don’t want to revisit?

Vote in Soaps.com’s poll to let us know which triangle irks you the absolute most then feel free to leave us your thoughts on why in the comment section below.

Also vote in Soaps.com's Genoa City poll to let us know what course you'd like to see Y&R's Colin and Jill's future take and read our Where Are They Now column for details surrounding Justin Hartley's Mistresses' role.