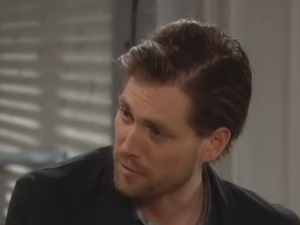 No complaints this week – lots of “B&B” boardroom intrigue, a toned-down Ally, and more Oliver than we’ve had in a long while. Thoughts:

Can’t get enough.
Bill’s campaign to win Brooke back definitely got on more solid ground this week, despite Quinn hiding in the closet with a flogger. Luckily for him she is keeping quiet…for now. How long can that last?

Creative differences.
How much of a brute did Ridge look like when he fired our sweet Oliver? Ally might have set fire to Ridge’s head if Eric hadn’t reversed the decision. As Oliver repeatedly reminded us, he’s not a Forrester, but maybe that’s why we love him. I don’t get Oliver’s interest in Ally, however their interaction at Bikini was kind of cute. Most entertaining was Maya getting an eyeful while dining with old cardboard Carter and sniping about Ally being too young. That girl was jelly! What’s your opinion on Oliver’s love life? Vote in Soaps.com’s B&B Poll: Who should Oliver date?

Get to sketchin'.
Wow, the gall of Ridge showing up after missing how many meetings because he was too busy dealing with his love life, and demanding to be put in charge again. It may be a given that he runs the company best, but his arrogance about it has never been all that appealing. Anyway, his firing of Oliver and subsequent expectation that he would be made president again made for some entertaining scenes. Among the best was Caroline's defense of her hubby by getting in Ridge's face. Nice to see her being such a spitfire! In the end, it seemed to be Brooke's revelation to Eric that Ridge had taken up with Katie, that spelled Ridge's undoing. While the logic of choosing a president or CEO of a company based on who is sleeping with whom is lost on most of us, it seems to make perfect sense to Eric. As for Katie, she showed up and accused Brooke of manipulating in order to get to work closely with Ridge. Her line about Brooke giggling and her clothes falling off was gold. Yes, lots of controversy and confrontations in the boardroom - loved it.

Find out which soap opera stars will be at the Annual SoapFest Event.