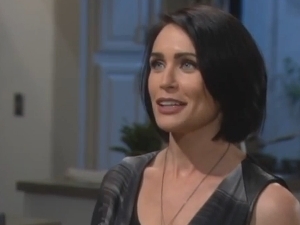 So much to love this week on “B&B,” what with the comic relief and the very unexpected reveal about Ally! Thoughts:

Little dagger.
Last Friday’s episode, with Liam throwing up a little bit in his mouth at the sight of Bill and Quinn, was one of the best in memory, and left us eagerly awaiting what came next. We weren’t disappointed. Quinn and Bill are deliciously nasty together, and the scenes with Hope hearing noises and asking Liam if Bill was ‘alright up there’ were simply hilarious.

You can’t marry my mother.
While there’s definitely an argument for Hope being the wrong person to judge others when it comes to relationship snafus, she served well enough as the voice of reason, and even conveniently helped spirit Brooke across the ocean so Katie and Ridge could figure things out. One can’t help but think Brooke will be ticked when she finds out all of this, but then again, Hope is the one person Brooke won’t stay angry with.

Talkin’ about the threads.
It seems getting laid was exactly what Bill needed to get his mojo back. We could sense his old swagger had returned, and Brooke seemed to as well, as she didn’t send him packing quite as quickly this time. As for his so-far-secret romp with Quinn, something tells me Bill is going to face some big regrets about going there – especially if he’s able to win back his ‘prom queen’, Brooke. Quinn, for all her bunny-boiler tendencies, made a good point about her and Bill being very much alike and ruthless – there’s very little doubt she could give him what he wants, and would know when to give it to him. Haha! Loving the scenes with these two…

Amazingly wonderful.
Okay, Katie has declared her love and she and Ridge are officially on very dangerous territory. We know Katie feels guilty, but hearing her say it every other minute is annoying. She needs to stop talking, and Ridge needs to start kissing her somewhere other than her forehead. Thanks.

Mile high club.
Wyatt's need to go to Paris with Hope made him seem unappealingly clingy, so it helped that it turned out he had a work-related reason to be there as well. Not that it's unusual for new couples to hang off each other 24/7, but it's preferable for Wyatt to keep his edge.

This is a surprise.
Eric was very mellow about Taylor showing up unexpectedly in his office considering how she left him. It was odd that they didn't discuss their own relationship and talked about everyone else!

Get your hands off her.
Wow! Ally's character certainly swerved in another direction out of the blue. This was an even more dramatic change than when Quinn turned greedy and warped. No longer the sweet little person who first showed up wanting nothing more than to hock her own line of shoes, Ally is suddenly rocking a vibe worthy of a horror film. In fact, we wouldn't have been surprised to see her head start spinning around like Linda Blair's in "The Exorcist" when she was confronting the wayward Hope and the 'disgusting' Wyatt. Yipe. Suddenly the older generation were all whispering about Ally and her never-before-mentioned 'issues', while Ally took aim at her target. Despite Brooke and Hope's admission that Hope's 'message' had become 'problematic', Ally still blamed Wyatt for destroying Hope's perfection, and informed him that he was evil incarnate compared to the saintly Liam (whom I thought she wanted for herself...call me confused). She even slapped him across the head (no question he picked the worse possible moment to mention the Mile High Club...) It all culminated with Ally taking over Forrester Creations and firing Wyatt's wise-cracking, Hope-corrupting behind and forbidding him to go near Hope or her message ever again. We'll see how that works out for her...and for him. Skeery. What do you think about the change in Ally? Vote in Soaps.com's B&B Poll: Ally's issues.

Find out about ex-"All My Children's" Cady McClain to Y&R and more in Soaps.com's Comings And Goings.