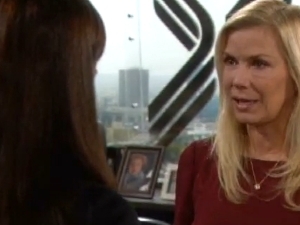 Viewers had to put up with some wallowing and yammering early in the week on “B&B,” but it was more than worth it in the end! Thoughts:

Meant to be.
The vice-president of Katie’s life really ramped upped his campaign this week, seemingly to no avail. Liam yammered, cajoled, coaxed, theorized, and yammered some more, but still Katie maintained that she would not do to Brooke what she did to her. Perhaps he got through to her after all, however, given how things played out.

Do this for all of us.
Of course Brooke had no idea of Katie’s feelings for Ridge when she badgered her into being her matron of honor, however, it was still a touch pushy considering the drama they were still recovering from. Had to laugh at the look on Katie’s face when Brooke was going on about Katie being a paragon of honesty and virtue!

Bad bet.
While Bill drank and grumbled to Liam about Brooke marrying Ridge it came across that he had genuine feelings for her and it wasn’t just about winning or losing or getting his own way. I felt for him!

Love's philosophy.
How perfect that Carter would choose Ridge and Katie's poem to read at the ceremony. Haha! Katie, of course, proceeded to collapse, which ultimately led to an extremely chemistry-laden scene, in the hospital no less. One couldn't help but spare a thought for Brooke, who truly will be sideswiped by the news that Ridge is in love with Katie and vice-versa, but there was just no denying that for now anyway, Ridge and Katie are where it's at. When Katie made herself vulnerable by telling Ridge the truth of how she felt, and he leaned in to whisper, "You're not lost," it was positively...swoon-worthy. Yep, just hot. Whew.

I get it!
Meanwhile back at the ranch, er, Forrester mansion, Hope wondered briefly about Katie before returning to her new favorite hobby, necking with Wyatt. In the living room, Stephanie made her presence known when the portrait crashed down as Eric kissed Donna. Donna is so happy when she's with Eric. It's sweet, and she's a better option than psycho Quinn, so maybe Stephanie will come around.

Naughty boy.
The scenes with Quinn and Bill getting down and dirty, and Liam getting an eyeful and throwing up a little in his mouth just rocked on so many levels. Sex, sizzle, hysterically funny... Loved it! Regardless of where Bill's heart lies, they've really hit on something with Bill and Quinn. Oh man is he going to regret this in the morning though. Can't wait! Would you like to see more of Bill and Quinn, or do you feel he belongs with Brooke or Katie? Let Soaps.com know by voting in our B&B Poll: Who should Bill be with?