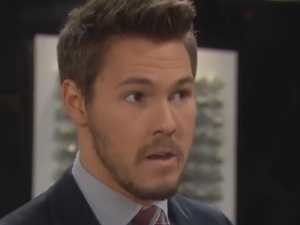 It’s been an interesting week on “B&B, mainly revolving around the Brooke/Ridge/Katie/Bill quadrangle. Thoughts:

The end.
After Liam spotted her rather intimate moment with Ridge and asked about it, the possibility that she might actually want to swap ex-spouses with her sister became all too real for Katie. She told Ridge in no uncertain terms that they could only be friends and sent him back to Brooke. Clearly it wasn’t an easy decision for Katie, who proceeded to behave irrationally by making Liam the vice-president of Spencer Publications. He must have thought she meant vice-president of her life, because he’s done nothing but try to tell her how to run it ever since. While it’s nice to have Liam focused on something other than his own love life, he’s been a bit much – Katie had to leave her own office to get away from him! I wonder if it will ever occur to him that his reasons for Brooke and Ridge not being together also fit for him and Hope.

Set the date.
During the bizarre Forrester meeting that dissolved into a discussion about Hope’s love life and then put the spotlight on Carter and Maya tying the knot, it became clear that Maya is beginning to have doubts about marrying Carter. Here’s hoping they put her out of her misery soon since she had more chemistry with Oliver in one kiss than in her entire relationship with Carter. Even in their love scenes it feels like Maya is pretending or trying to convince herself she feels something she doesn’t. She needs to let herself off the hook.

Not the most loyal bitch...
Just when viewers had almost written Quinn off as a dark, manipulative, scary psycho, she showed us her fun, flirty, wise-cracking psycho side, and just like that, we got excited about the character again! Kissing Bill came right out of the blue, but it was hot, and caught our interest, no question. Bill's cocky confidence that she 'wants him' is a sure sign that they might just 'go there'. Is this something you would like to see happen? Let Soaps.com know by voting in our B&B Poll: Should Bill and Quinn hook-up?

A brand new chapter.
So, Ridge proposed to Brooke and they're going to get remarried. Anyone else feel this won't go off with a hitch? Brooke made a beeline to Katie's office to share her news, remaining utterly oblivious to Katie wanting Ridge (man is she going to be blind-sided), but she forgot to let Bill know, so he turned up brimming with flowers and optimism on Valentine's Day only to get turned down. You almost had to feel sorry for the guy, who just cannot comprehend Brooke being able to resist him.

Doing nothing.
Wow, Hope wouldn't leave the hotel room in Hawaii and she didn't want to go out for a nice dinner on Valentine's Day. Guess she just wants to stay in and have...Wyatt. You have to respect that.