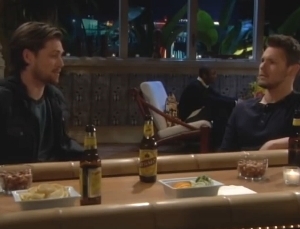 Another solid week for “B&B” moving into February sweeps and Valentine’s Day. Thoughts:

I would know.
Well Bill’s big scoop on Ridge and his mystery man fell flat when he brought it to Brooke. Loved the way Bill crowed that he would have ‘closed the deal’ with Brooke, unlike Ridge. Nevermind that he’s been trying to do just that since before Ridge returned and hasn’t been able to! Too funny.

Risky position.
If Rick is going to continue to let Hope call the shots at Forrester Creations based on the state of her love life at any given moment then perhaps it would be a good idea to put Ridge back in charge – as soon as possible. Yeeps.

Secret handshake.
By the time Liam arrived at Katie's house on Friday's episode, things between Ridge and Katie had moved beyond the secret handshake at the park and they were headed for their first forbidden kiss. Great chemistry. There has been much debate about whether Katie should/would go down this road or not. On the whole it's all a little too 'keeping it in the family', and it would definitely erode Katie's position of outrage toward Brooke, but conversely, it's undeniably fun to see the tables being turned...and that's soapy goodness. Let Soaps.com know what you think by voting in our B&B Poll: Should Katie go for it with Ridge?

Personal floatation device.
Liam was just like an annoying parrot that won't stop squawking this week. From his rant to Quinn about how he was so sure that Hope would terminate them (didn't happen), to his droning on and on to Oliver and then poor Ally over dinner about how dangerous the Fullers are, how Hope will eventually see through them, and how he and Hope would have been married by now, he became unbearably annoying and unappealing. Get a life. Just don't get one with Ally, because as cute as her crush is, she's a kid. Liam needs an experienced older woman in his bed to distract him...and to give him some tips because based on Hope's choice this week, I'm gonna guess Wyatt is better in the sack!

It feels good.
Hope deciding to stay with Wyatt, and their ensuing sex scenes at the beach house were encouraging. This is possibly the most interesting and grown-up the Hope character has ever been.

Check out Soaps.com's Primetime Dish for the scoop on Bob Newhart's return to The Big Bang Theory and more.