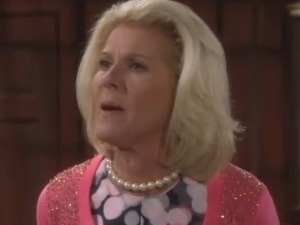 It was an eventful week on “B&B,” with Brooke pushing Ridge to commit, Bill scheming, Wyatt being found out, and more. Thoughts:

The wrong pony.
It’s kind of a kick to see Pam being all up-in-arms about Wyatt’s heist after all of the things she’s pulled in the past, but it’s entertaining. Charlie is a bit annoying, but so far still makes a good partner in crime for Pam. Quinn will be livid when she learns Pam double-crossed her. Where’s Donna? She needs to get up to speed on the latest.

A little patience.
Katie sure made an understatement when she said that patience wasn’t exactly Brooke’s strong suit. Ya’ think? She proposed to Ridge about three times at Katie’s place, pressured Katie to put in a good word for her, and then put the screws to Ridge to go to Big Bear and/or move in with her over lunch the next day. On a mission!

Camping out.
The setting in the tent by firelight set the mood nicely for Wyatt and Hope’s first time. It was actually enjoyable to see them take their relationship to the next level. Unfortunately, Hope behaving like a virginal teenager after the fact kind of ruined it. She needs to lose the Disney princess vibe now that she’s slept with a couple of different guys and had a few near misses at marriage.

Black and blue.
Does anyone else not even care that Wyatt palmed the diamond necklace? It's just another reason for Hope to have a setback in her feelings because he didn't live up to her almighty standards. The ups and downs of this triangle business have just become exhaustingly predictable and repetitive (especially since it's a continuation of the Hope/Steffy/Liam theme). It never ends! Should Hope forgive Wyatt? Vote in Soaps.com's B&B Poll: Should Hope forgive Wyatt?

He's different.
Definitely beginning to get on board with a Katie and Ridge hook-up! The energy traveling across the room as they locked gazes while Brooke and Caroline each yammered away was positively zingy, and it's great the way they are building a slow heat between them as the attraction takes hold. Delish!

Somewhere over the rainbow.
It was good to see Bill back to his old self this week; digging up dirt instead of pleading and begging. Of course he and Justin think they came up with something earth-shattering about Ridge - it looked like he was seeing a man while in Paris. I have a hunch that the photos were taken out of context and Bill will end up with egg on his face after all is said and done.

Check out Soaps.com's Comings and Goings for the scoop on Tristan Rogers' return to The Young and the Restless and more.