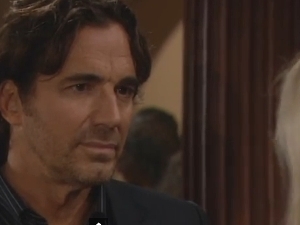 It was a solid week on “B&B,” what with a road trip, a secret about to come out, an illicit kiss, and more. Thoughts:

Come with me.
The week kicked off with Ridge asking Katie, “So what drove you into my strong manly arms?” Really, Ridge? Things only got cheesier from there as he proceeded to recite a sonnet. No question we love listening to NuRidge’s deep manly voice, but who does this? There’s definitely an attraction building between Ridge and Katie, and it’s good that they’re allowing it to evolve slowly as no one would buy them just suddenly jumping into the sack together. Possibly the only person who hasn’t picked up on their chemistry is Brooke, who walked into Katie’s house at week’s end to demand that Ridge put a ring on it. What will he do?

Check this baby out!
It was a busy week for Wyatt who not only got handed a new beach house but also purchased a vintage RV. It might have been prudent for Quinn to give Wyatt a heads-up about Charlie before he left on his trip though. Speaking of trips – Wyatt and Hope just got back from Hawaii and now they’re leaving for a road trip off the grid. Don’t these people have to work?

Out-of-order.
Quinn trapping Liam in the elevator was actually pretty funny. Let’s face it, he deserves it for his insistence on continually hunting down Hope and making viewers sit through more rehashed conversations about why they should be married.

Fair enough.
You go, Oliver! Even though Maya had that annoying starry-eyed look on her face it was hot that Oliver just leaned in and kissed her. After she told him he couldn't do that, he just grinned and said he 'felt something'. I bet. Boy's got mojo!

Sex on the beach?
It's no wonder Wyatt bought Hope some different clothes to wear on the trip - did you see those knee socks? Horrors. In any case, they set up camp and did the obligatory running/goofing/kissing on the beach stuff before things turned more serious after sundown. It sure looked like Wyatt was on track to spice up Hope's gumbo. If Liam knew what was happening he'd toss his tofu.

Takes one to know one.
That was a hilarious montage of Quinn pretending to be BFFs with Pam - loved it. Something tells me the friendship's going to be short-lived though as Charlie seemed to be apoplectic upon seeing them together. Clearly the secret is going to come out... Would you like to see Pam and Quinn as friends or foes in the future? Let Soaps.com know by voting in our B&B Poll: Should Pam and Quinn be friends?

The Bold And The Beautiful To...