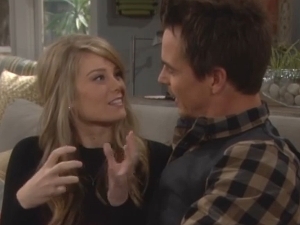 This week “B&B” had some irritating storylines happening as time inched toward February sweeps. Thoughts:

The cowboy and the stable girl.
While the details of Pam and Charlie’s bedroom shenanigans verged on ‘too much information’, the comic relief was absolutely appreciated in this awful plot of Liam trying to get one over on Wyatt as the never-ending quest to make Hope see the light and pick him continued. It’s at the point where many are cheering for baddie Quinn out of sheer frustration with Liam for keeping this thing going. The Hope love triangle stuff has become akin to banging the collective heads of viewers against a brick wall.

Beach house bingo.
Meanwhile, down at Wyatt’s new beach house, he and Hope had a giggly love-in which consisted of interminable conversation about how great she is, how great he is, and how great they are together. At one time, Wyatt seemed to have such potential, but he’s clearly drank too much of the Hope Kool-Aid. What should Hope do? Let Soaps.com know your opinion by voting in our B&B Poll: Should Hope move in with Wyatt?

Consolation prize.
Though some have pointed out that Katie isn't in a position to be quite so self-righteous given her past with Nick and Bridget, it was nonetheless satisfying to see her shoot Bill down when he came looking to reconcile. The other good thing about it is that Brooke, who is now so terribly concerned about Katie's happiness and Bill and Katie's family, isn't getting things her way just yet. One aspect of this that doesn't ring true is Bill taking orders from Brooke and not running the show his way.

Stink of superiority.
The Bill/Ridge face-off was fairly entertaining although it made Bill look as though he was grasping at straws a bit, and again, it may be what he deserves right now, but it's not a good look for him.

Moment of crisis.
Rick would be far more appealing as a high-powered executive if he was more about action and less about whining and waiting to see what Daddy will do.

Lost to me.
Katie running out of Brooke's house into Ridge's arms sure seemed like foreshadowing. This is going to happen.

Check out Soaps.com's Primetime Dish for Ravenswood spoilers and more.