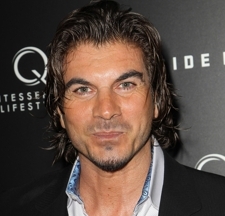 Veteran Daytime actor Victor Alfieri (ex-Ciro, “All My Children,” ex-Giovanni, “The Bold and the Beautiful,” ex-Gianni, “Passions,” ex-Franco, “Days of our Lives”) has filed a restraining order against neighbor Christopher Veech after the man allegedly attacked him with a hairbrush. TMZ reported that Alfieri claimed Veech hit him in the face with a hairbrush last month, and has harassed him for the past year. Veech was arrested for battery following the hairbrush incident and released. A restraining order was issued, but considering the duo resides in the same building, the order stated that Veech must remain just three yards away from Alfieri.