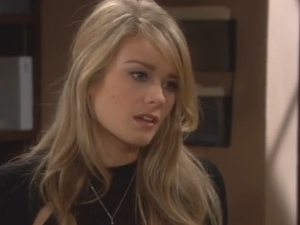 This week we were glad to get out of Hawaii despite the Polar Vortex. Thoughts:

Let it blow away.
After Monday’s episode viewers had a reprieve from the beautiful flower talk and endless kissing in Hawaii, which was much appreciated. Hope’s return on Friday saw her confronting Quinn about her interference and dealing with Liam, who clearly is still tracking her GPS. It was mildly interesting that she admitted to dating Wyatt, but very discouraging to hear Liam announce that he would wait for her and work to prove his point about Wyatt and Quinn. Urgh…will it ever, ever end?

Park your man.
Oh you have to admire the sheer nerve of Brooke beating a path to Katie’s door to start the process of having her take Bill off her hands now that Ridge is back. It was entertaining to see Katie call her on it too.

Their savior.
So it’s back to the ready-to-wear versus couture debate at Forrester Creations, and to Rick versus Ridge. It’s a little bit ‘been there done that’ in that we’ve heard all the arguments before when it was Thomas and Rick going head-to-head, so hopefully there will be some sort of twist. What would actually be more entertaining is if Forrester Creations had to go up against a competing fashion house again – might take their minds off the continual in-fighting. Offensive this week was Thorne being unceremoniously shipped off to fill Ridge’s vacant position at International. With Ally back, it made sense to have him around, plus it might have been interesting for him to get a love life since he’s one of the hottest men on the show.

Catch up.
Too bad Donna and Eric's catch-up session was all about Brooke and Katie and their men. They obviously need lives of their own to talk about - how about letting them have a honeybear session - Quinn would go ballistic!

Bad habit.
Well, Brooke's attempted seduction of Ridge hit a roadblock when he couldn't get past the way she'd treated Katie. I thought she was going to get her way for a minute - she certainly pulled out all the stops, even bringing up R.J. It was a miracle Ridge was able to walk away. Rather amazingly even for Brooke, she actually had the nerve to blame him for what she did to Katie, saying it wouldn't have happened if he wasn't away. Gak! As for Bill, he definitely underestimated Brooke's connection to Ridge by telling Caroline he was like a bad habit she needed to break. Bill's talk with Brooke on Friday (at Katie's place, weird) was a little bit eyebrow-raising. Brooke unilaterally deciding that Bill and Katie need to reconcile so she can have her happy ever after with Ridge was presumptuous on more than one level. It was uncharacteristic for Bill to rather lamely agree to try to get Katie to take him back (made you wonder what he was up to), although it was definitely foreshadowing when he asked her, "Are you sure you want me to let go?" Hmm. Be careful what you wish for Brooke. If Ridge ends up with Katie, it could be Brooke left out in the cold. Fitting?

Intoxicating and addictive.
We've been hearing a lot about how Bill would look at Katie in such a way that she'd get a jolt and it was all so intoxicating and addictive. Something tells me that she might be able to get just as hooked on what NuRidge is offering up. Seems he's feeling something toward Katie what with the suggestive arm brush on Friday. Will Brooke get a very bitter taste of her own medicine? Would it make Bill want Katie again? The possibilities...

What would you like to see happen with Brooke next? Should she win Ridge back, be won over by Bill's continued campaign, or experience payback by watching Ridge and Bill end up fighting over Katie? Let Soaps.com know by voting in our B&B Poll: What should happen to Brooke?

Check out Soaps.com's Primetime Dish for Girls spoilers and more.