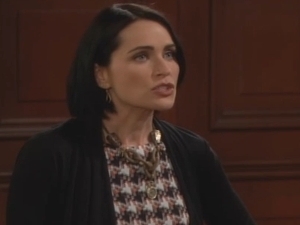 Happy New Year to all! This week things got a little ‘been there, done that’ with a couple of stories, but Ridge and Quinn kept things interesting. Thoughts:

Make me understand.
Ridge’s reaction to Brooke telling him she’d had an affair with her sister’s husband was quite realistic. “At what point did you two decide any of this was okay despite what Katie said?” Indeed. What is completely unrealistic is Ridge not having heard a word about this while he was abroad – it’s not like he was holed up in an igloo near the Arctic Circle with no means of communication and no contact with human beings. Jeeze!

Aloha.
So Hope sent Liam packing from Hawaii, and then let Wyatt spend his tropical vacation catering to her while she moped about her ex and refused to leave the room. Wyatt provided entertainment, food, jewelry, and even Hawaiian legends and lore, all for a couple of smiles and kisses. I guess Wyatt realized when Hope invited herself along that she’d be bringing all her baggage, but still, it would have been refreshing to see him get a little turned-off by her sulking. As for Liam and Hope’s situation, at this point the double-standards and hypocrisy are mind-boggling. Get married or give it up.

Holding up.
The writing is on the wall a bit for Katie and Ridge, who tenderly held her after getting to the core of her pain and not allowing her to get away with telling him she was ‘fine’. Methinks Brooke will be getting a taste of her own medicine before too long. Some actually found themselves thinking Ridge might kiss Katie when New Year’s hit, and wanted it, such was the chemistry they shared while in close proximity.

Not going anywhere.
I'm not feeling Bill's pursuit of Brooke. It's not him; not his style - seems too desperate. It would be more fitting for Bill to start dating someone else to get her attention, or to manipulate and scheme somehow. Showing up and begging to get back into her bed ruins his usual appeal. Not only that but they keep having the same rehashed conversation. Something needs to change here if we're really going to feel torn between Brill and Bridge. Do you think Bill pursuing Brooke as he has been is true-to-character? Let us know by voting in Soaps.com's B&B Poll: Bill's pursuit of Brooke.

Not the healthiest relationship.
How funny that it didn't occur to Liam or Bill as they criticized Quinn for scheming that Bill had gone to far greater lengths to manipulate the outcome of his son's love life.

Shoot me now.
Was anyone else confused as to why Quinn seemingly put herself in charge of a photo shoot at Forrester? Where was Eric, Rick, Thorne, Caroline, or anyone who's worked there longer than five minutes? It's been fun to have Quinn as an antagonist, but her attitude is out of control at this point. Hollering at people to shut-up, openly crowing about her newfound power and success, arguing loudly in the FC offices, making threats to anyone and everyone - it's getting pretty ugly. As for her altercation with Liam, it would have been a hundred times more entertaining if we were still capable of getting revved up about the idea of Liam going after Hope for the trillionth time. No. One. Cares.

Check out Soaps.com's Primetime Dish to watch a Hart Of Dixie spoiler video and more.