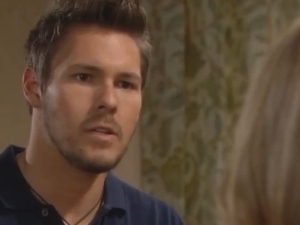 It was an eventful and at times intense week on “B&B.” Thoughts:

Round and round it goes.
So Hope saw Liam with Steffy and ran off to join Wyatt. Liam pursued them to set the record straight. He asked Hope why she would throw in the towel and turn to Wyatt before even seeking an explanation. Funny, since he quickly turned to Steffy every time he had a misunderstanding with Hope in the past. That’s the problem with this storyline – it’s an endless loop of sameness that now just elicits a great big, “Who cares!” They’re all hypocrites and they’ve been in the same position more than enough times to have learned how to deal with it differently, yet they don’t. It’s exhausting and based on the huge misconception that all viewers give a crap who Hope marries. The girl needs to fade into the background for a while, have fun and gain life experience. Wyatt has brought some new flavor to the mix and that might be interesting to explore, but he’s basically just a male version of Steffy as they’re using him in this triangle business. The kicker is that Donna and Quinn sparring over Liam going to Hawaii was way more entertaining than Liam confronting Hope and Wyatt in Hawaii, which was a scene we could recite, twitching and grimacing, in our sleep. Time for change!

Bluebird.
The Christmas gathering at the Forrester mansion was as heart-warming as ever, with Stephanie never far from their minds and Ridge surprising Brooke with R.J’s return.

Business brief.
Ridge versus Rick at Forrester Creations has a lot of promise. It was strange to see Thorne grinning away at Ridge – have to wonder how long that will last.

Take it personally.
It's irksome that Eric won't listen to Donna where Quinn is concerned, although maybe he'll start to wise up now that Quinn basically admitted to sabotaging Hope and Liam's wedding. Or not. Eric tends to think with his libido, so if she gets him into bed he'll remain happily oblivious. Meanwhile, the Quinn/Donna rivalry is building in intensity. Quinn's downfall might be her newly acquired arrogance, which is downright ugly. Donna may have been right to warn her not to underestimate the history or the loyalties at Forrester Creations.

Bon Appetit!
Last week we were looking ahead to a testosterone-fueled rivalry between Bill and Ridge and it appears viewers won't be disappointed. It struck me as Katie told Bill that if Ridge wants her sister, he'll have her, that the same could be said about Bill, meaning it could be quite the showdown. Brooke seems to mainly have eyes for Ridge at this point, but it remains to be seen how he'll react to the revelation of her affair with Bill, and if Ridge and Katie compare notes, and grow close, it could lead to them giving Bill and Brooke a taste of their own medicine. This could be explosive. Would you like to see Ridge and Katie get together? Vote in Soaps.com's B&B Poll. Should Ridge and Katie get together?