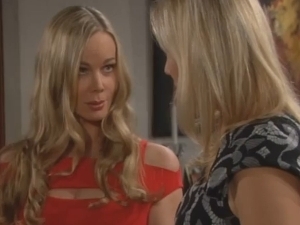 It was a week of classic “B&B” type stories with Ridge’s return and another aborted attempt at a Hope/Liam wedding. Fun!

Revved up and ready.
Well, watching Eric and Ridge reunite and rehash all the lame nonsensical reasons Ridge dumped Brooke, missed his mother’s death, and stayed in Europe, was all fine and good, but what viewers were really waiting for was the reunion of Ridge and Brooke. It didn’t disappoint. Although it was a tad sappy to repeat the rose petal in the water scenario, NuRidge had me at ‘Logan’ what with the electrically-charged moment on the stairs and the knee-wobbling kiss. Very hot. It’s also delightfully soapy how he assumed Brooke’s life has basically been at a standstill without him and announced that he wants to essentially move back in and pick up where they left off. “We’ll celebrate later.” Such confidence! It will be interesting to see how he reacts to the news of Dollar Bill having moved in on his territory, and indeed, how Bill reacts to the reappearance of Ridge. Testosterone central!

Good news.
Who else just wanted to throttle Quinn in the Paris office? Not only did she listen to Steffy’s call, but she didn’t even give her space afterward, just started right in pushing her agenda. Overbearing much? Such a turn-off, which is exactly how we’re probably supposed to feel about Quinn at this point – so bravo!

Whisper, whisper.
It was a kick seeing Donna and Eric whisper-chatting about Ridge’s return and what it would mean for Brooke – love Donna and Eric together. Also, they individually cornered Brooke to grill her about whether she’s told Ridge anything about Bill, or Bill anything about Ridge yet. Plus, Brooke had to contend with Bill sidling up to her and talking about how the next wedding will be theirs. Brooke must have been just gritting her teeth. Hilarious.

To Hope and Liam.
The gathering of folks waiting for Liam and Hope to attempt marriage for the umpteenth time was pretty entertaining - in large part due to Pam and Charlie's antics. Is that guy her soulmate or what? So glad Oliver was there too, he's such a cutie. Needs a storyline... I wondered why Hope wouldn't have invited Thorne and Ally? Or maybe she did and Ally stayed away in protest since she doesn't like the way Hope operates. Too funny.

Dark cloud lifted.
As Steffy flew back to tell Liam her good news, it seemed to me that she would only be there long enough to throw a monkey wrench into the works, so it was no real surprise how it played out. Wouldn't it have been fun if Steffy had left the cabin, gone back to the Forrester jet, and decided to go to Hawaii with Wyatt for kicks? Imagine Hope's face if she'd showed up at the jet only to find Steffy there as well. "Arghhhh!"

Rock and roll.
Hope showing up on the plane, leaving Liam to face the wrath of Brooke, was kinda' fun. Wyatt was a ball of confusion, relief, and happiness all mixed together. It was cute how he admitted he really wasn't sorry. Going on vacation with a tearful girl who had just run from the altar may not be ideal, but clearly he was up for it. Who wants to bet Liam will be hot on their heels? It will be Mexico all over again. What should happen next? Let Soaps.com know by voting in our B&B Poll: What next for Hope/Liam/Wyatt?