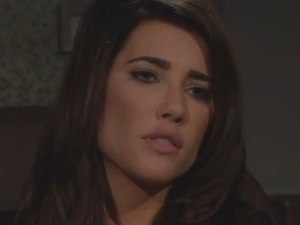 It was definitely an exciting week full of anticipation what with the return of both Steffy and Ridge. Thoughts:

I’m done.
Um, since when does Liam, or Hope for that matter, call the shots about important business decisions at Forrester Creations? The whole premise of Liam being able to order the cutting of ties with Quinn Artisan made not one iota of sense. Likewise, the idea that Eric would agree to terminate a lucrative partnership based on the drama surrounding anyone’s love life, let alone the notoriously unstable pairing of Hope and Liam, is ludicrous. Nevermind that there was no consultation with Rick, the president of the company. Ack.

Going places.
One thing Liam had to say this week was certainly on the money – Quinn’s obsession with her son does verge on the creepy, which is also an apt word to describe her pawing all over Eric while positively dripping with ulterior motives. Donna’s definitely onto something with her warnings, but something tells me Eric’s already thinking of getting Quinn into the sack, and therefore won’t take heed.

Not finished.
So Hope loves Wyatt, but loves his brother more. Ouch. Their passion was palpable at Wyatt’s place, even though it ended badly. Based on the fact that Hope can’t even trust herself to work with Wyatt, it’s likely she’ll be back for some more Bollywood-style lovin’ as soon as there is the slightest reason to be miffed with Liam.

This has to stop.
Oh the cheesy goodness of Bill sending stallion emails and doing stallion mating calls over the phone. A fool in love. So bad, it's good... Also, the expressions on Donna's face as she took this all in at Brooke's - fabulous.

Sounds like an ultimatum.
Is it just me, or is Brooke noticeably less enthusiastic about the latest round of 'Hope and Liam plan a wedding'? Just sayin'.

You can trust me.
It seemed out of character for Wyatt to go to Liam scraping and begging. I'd have thought he would have taken his jewelry company back to square one before putting himself in such a position.

Good news calling.
Wow! So Steffy flew home for tests with the doctor and lo and behold, back in Paris she received news that the experimental procedures had worked - she can conceive a child! It's a wonder Quinn was able to restrain herself from doing a celebratory dance in the background. What a deliciously soapy coincidence that this happened when it did - this could change everything. Love it.

Read Soaps.com's Grey’s Anatomy Recap: Get Up, Stand Up to find out what happened at April and Matthew's wedding!