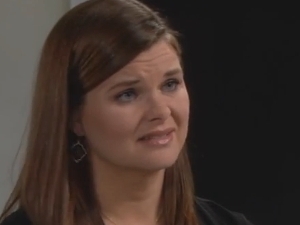 The big stories this week were the wedding, Quinn’s dark side showing itself again, and Liam deciding to give Hope an ultimatum. Thoughts:

Crazy in love.
While most viewers got sucked into Caroline and Rick’s wildly romantic impromptu wedding (how could you not?), some stopped short of buying into Maya helping the bride get ready. Please. It was also shocking that Caroline got married without either of her mothers present. It all made for an entertaining couple of days’ scenes though – Pam and Charlie kissing in the kitchen, Donna’s interludes with Eric, which were fraught with delicious sexual tension (though it was odd that Eric didn’t bed her – get him to the doctor), but in the end, the talk was all about Quinn’s sinister dark side coming out again. This chick is almost as scary as the idea of yet another “B&B” triangle. While some might be concerned for Donna’s welfare, I say she can hold her own, and with best friend Pammy backing her up, Quinn might be in for more than she bargained for. Fun! Whose side will you be taking? Vote in Soaps.com’s B&B Poll: Donna or Quinn.

Nothing’s in your way.
Clearly Hope is having a blast playing the field, so why is her Aunt Katie sternly warning her that she may lose Liam if she doesn’t marry him. Why would anyone be pushing marriage on someone Hope’s age who obviously isn’t ready? It’s like in the world of “B&B” everyone has to be married or engaged or at least working hard toward that goal. Gah!

I usually play with men.
You had to laugh at Ally beating Liam’s butt in tennis. However, she is a somewhat puzzling addition to the triangle storyline. It’s been good fun watching her take aim at Hope’s behavior, but she seems too young to even be involved in all this. It’s super uncomfortable to imagine her jumping in to make this a quadrangle, even after a make-over. The other issue – why is Ally so sure that Liam deserves better? She is terribly indignant on Liam’s behalf considering she really doesn’t know him at all. On the other hand, her conversation with Thorne about Hope was funny. “I don’t think I like what she’s teaching.”

Go after what you want.
Quinn and Wyatt's endless conversations about ambition, accomplishments, hanging onto what they've managed to get, getting more, and patting themselves on the back for everything under the sun, are just kind of gross and getting very repetitive. It makes them very unlikeable in the moment.

Unfinished business.
Brooke is really trying hard to resist Bill, but you can see it's a huge battle for her not to give in to such over-the-top romantic proclamations as, "We have unfinished business...in your bedroom." It's anyone's guess if her resolve will crumble, but if it does, it's likely to happen right before Ridge returns and walks through the door of her house. Wheee!

The ultimatum.
Well, Liam really tried to pull off that 'me Tarzan, you Jane' moment when he gave Hope the ultimatum and kissed her, but she looked way more breathless and heart-pound-y after Wyatt kissed her in the cabin... Anyway, it will be interesting to see what gets stirred up when Steffy pops into town next week. Read Soaps.com's Jacqueline MacInnes Wood interview.

Read Soaps.com’s Grey's Anatomy recap: Man On The Moon, to find out what happened with Bailey's OCD.