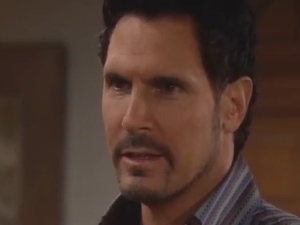 Men will come and go…
It’s a relief to see that Katie isn’t forgiving Brooke outright and is keeping the ‘Logan sisters’ hype at arm’s length – it wouldn’t be realistic for her to welcome Brooke back into her life with open arms at this point, despite the papers/leaves switcheroo. It was interesting that she extracted a promise from Brooke to never be involved with Bill again – even though she doesn’t entirely trust her. Who would? The minute Katie left the room, Brooke started reminiscing about kissing Bill!

Tools in the toolbox.
While some are enjoying the new angle with Quinn seeming slightly crazy and dangerous, it’s a little off-putting given that she’s become quite a bit different from how she was at first – a person with a great deal of pride, self-control, and hard-won dignity. Especially when you factor in her manic glee over being connected to the Forrester money, power, and prestige – something she wanted nothing to do with in the beginning!

The damage is done.
Bill, who clearly is unable to take 'no' for an answer, continued to pursue Brooke relentlessly and showed up at her door to make another appeal for them to reconcile. Brooke stuck to her guns but you could see the inner battle going on and her wanting to give in. It makes one wonder how long it will take for him to break down the rather shaky walls she's put up. Do you think Bill will be able to win Brooke back? Vote in Soaps.com's B&B Poll: Can Bill win Brooke back?

Cooking with gas!
Charlie and Pam were the hit of the week with their naughty, flirty talk about his nut rolls and her cherry pie, not to mention the living dangerously in the kitchen. So good!

So much to be thankful for.
It was weird to have Hope running Thanksgiving dinner, but the idea of bringing together such an unlikely group for Thanksgiving was definitely fun - especially the concept of everyone having to say something nice to the person on their right even if it was supremely awkward. It was odd to have Hope seated at the head of the table, and we have to assume she put Wyatt beside her, knowing he would use the opportunity to gush about her, which he did. It was also curious that Maya would agree to attend and put herself through watching Rick and Caroline maul each other - doesn't she get enough of that at work? Anyway, everyone behaved, including loose cannons Pam, who hilariously pronounced Donna to be her best friend, and Bill, who rose to the occasion and complimented both of his exes. Hope's announcement that everyone at the table loves Liam might have been a hair short of the truth, but some wondered if Ally might begin to feel that way after the way he complimented her so nicely. Hmm. It was a good celebration all-in-all, with the wedding of Rick and Caroline still to come next week.

Happy Thanksgiving to all of our U.S. readers!

Read Soaps.com’s After The Soap Finales: Where Are They Now to read about ex-"As The World Turns'" Ellen Dolan in After Life and much more.