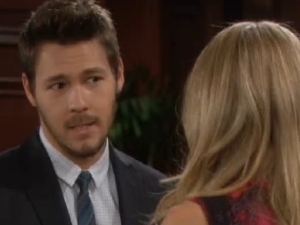 There was some pretty shocking stuff this week surrounding Dollar Bill. Everything else was fluff. Thoughts:

It’s not that simple.
While it seemed like a fun idea for Hope to lead on both Liam and Wyatt, it’s actually been a yawn. Liam whining about getting married, and Wyatt boasting about the publicity-generating heist just makes them both seem unappealing. Hope has also adopted this odd way of talking to them sometimes that sounds rehearsed or like she’s not really feeling what she’s saying – it’s distracting. Bottom line – listening to Hope and Liam discuss their relationship six ways to Sunday is just so boring at this point.

Dear ol’ dad.
Wyatt and Liam discussing Bill brought some snappy lines and a touch of brotherly agreement for a change. It will be interesting to see if they both react the same way when they hear what Bill did to Katie and Brooke.

Exploring her options.
Was anyone else tempted to explore other options rather than sit through that insipid conversation between Hope and Caroline this week? Ye gad. Caroline sing-songing to Hope about Liam and Wyatt made me want to smack her. She wasn't supposed to be such an airhead! Further, why would Rick and Carter have become 'close', and why on earth would they ever dream of pushing for Caroline and Maya to socialize together? Dumb!

Lies...all lies!
Wow, so Bill really pulled a cruel move on Katie and Brooke, and boy did it make for a lot of entertaining scenes. Many think Brooke deserved nothing less given what she did to her sister, but Katie not so much. Unfortunately, Katie buying into Bill's scam so easily was relatively unbelievable. Even if she bought into the feigned romance, Justin showing up at the door bright and early the next morning with paperwork should have been her first big clue that she was being played. What was up with Justin anyway, wanting Bill's mojo back in the boardroom? Overdoing the cheerleading just a bit... Anyway, Katie signed the documents and Bill made his way over to inform Brooke that they could now be together again - nevermind that he had boinked Katie just hours before. You have to admire the sheer audacity of the man! Brooke, who normally might have applauded the sheer genius of her man and leapt back into bed with him, decided that although they'd both screwed Katie over before, it wasn't okay for him to mess them both around. Katie conveniently wandered in as Brooke was freaking out. Bill tried to make them see, ahem, reason, but got kicked to the curb. He headed straight for Spencer Publications to hang out with Alison and Justin, who were practically salivating for the opportunity to kiss his behind. Their boozy celebration was short-lived however, as Bill soon learned that he'd been once again bested by a Logan woman. We knew those leaves had a purpose... Pretty entertaining stuff all-in-all. What do you think Bill should do next? Vote in Soaps.com's "B&B" poll:

Read Soaps.com’s Grey’s Anatomy Recap: Sorry Seems To Be The Hardest Word to find out how Callie ended up being sued for malpractice.