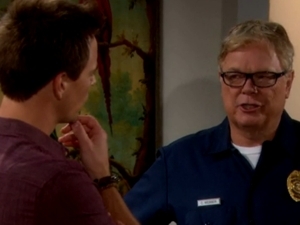 It wasn’t the most exciting week ever on “B&B,” perhaps a bit of calm before the storm? It might have been fun to have a Halloween party at Bikini Bar or something to break up the droning on about Bill’s free-climb and how great the diamond’s been for Hope’s line etc… Thoughts:

It’s official.
Liam seemed somewhat astonished – again – that Hope wasn’t dying to put his ring back on and marry him on the spot. It was amusing. Even more entertaining was Hope announcing that she would take a break from her personal life to focus on work (which seems to consist of chatting people up at the boutique), which actually means she will kiss both guys on a regular basis until she feels another perfect wedding coming on.

Proposal story.
Wow, Brooke was so pleased that Rick proposed to Caroline and she didn’t even have to manipulate – how easy was that? It was all very gushy as they told Eric and Brooke about their engagement and teased about being pregnant. Caroline hinting to Eric about him designing her gown was tacky, and so was her idea to blog about their honeymoon. She wasn’t this shallow when she first arrived, right?

Ya wanna hibernate?
Brooke's sexy Halloween surprise for Bill made for a cute scene. It would have been nice to see other characters dress up or celebrate Halloween too.

Charlie the chump?
Poor Charlie. All his tales of heists and now he's got his own to cope with, and it's a doozy. Wyatt clearly set him up and staged the diamond theft to snag some extra publicity. Therefore, Wyatt will almost certainly save the day at some point, thereby getting his worldwide publicity for Hope's line, and gaining superhero status with Hope into the bargain. I wonder if Liam will smell a rat? Anyway, Charlie might be in a bad way right now, but methinks the suave silver-haired security guard will be back to swapping baking tips with hot-to-trot Pam in no time.

Practically Indestructible.
The headache-inducing repetitive phrase of the week quickly proved to be 'free-climbing' as Katie agonized and discussed the dangerous undertaking with anyone who would listen, and Bill stubbornly insisted on going through with it despite the wind kicking up, the guides cautioning against it, and Brooke's flirty request to belt up. While we're on the subject of their trip, are Othello, Oliver, and Ramona the only three inhabitants of Aspen, Colorado? Just asking... If Katie's premonition comes true, and Bill has an accident while climbing, who do you predict he will want by his hospital bedside? Vote in Soaps.com's B&B poll:

Read Soaps.com’s Grey’s Anatomy Recap: Thriller to find out who was bitten by a patient!