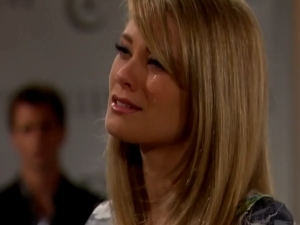 Hooray for variety this week, and some comic relief! Thoughts:

Reservations.
Pam got it right this week when she asked Liam if Hope was over-reacting again. Pretty much! Video or not it would be quite unrealistic for Hope to think he doesn’t harbor some feelings for Steffy. Hope told him she couldn’t take his ring back because she has to feel ‘certain’. The reality is she will never be able to feel certain, given their history, and subconsciously she was likely ready to jump at any chance to have some fun with Wyatt – she’s been upfront about being intrigued by him and the attention he pays her. If she was really worried about finding certainty about Liam, she wouldn’t be fluffing off kissing Wyatt.

It doesn’t matter now.
Awkward! It was hard to know how to feel about Maya waiting for Rick at his place and realizing he and Caroline were engaged. In fact, it’s been hard to get a handle on this whole storyline because everything has happened at the speed of light. Rick went from loathing Caroline to being engaged to her, while Maya went from desperately loving Rick to being engaged to Carter, whom she hadn’t even dated, all within a few weeks. At this point, viewers are pretty much just trying to keep up!

You’re better than this.
Hope’s real talk to her mother this week won her a few popularity points. As for Brooke, she pretends to listen and seems to feel guilty, but ultimately she does what she’s always done when in love, which is to stand by her man no matter who gets hurt. Loved the scene with Bill, Brooke, and Hope awkwardly sharing take-out. So funny.

Brotherly scorn.
Liam and Wyatt’s squabbling over Hope is getting tiresome – more action, less talk. It’s also been annoying to see Liam suddenly taking this ‘cop out’ position on what Bill does, when he was always equally as opinionated as Wyatt before his half-brother came on the scene. Seeing them have a go at Bill together would be more interesting.

Watering hole.
Once again the scenes with Oliver at Bikini were really good. Liam got to talk about Wyatt some more, and look like a pansy some more by drinking lemonade. Loved Oliver telling him it might be time to 'cut the cord' from Hope. Hilarious. Seriously though, what else would Liam do if he stopped pursuing Hope? There's only her and Steffy to date in all of Los Angeles and Steffy's still gone!

Sherlock Liam.
Thank goodness for Pam and her lemon bars because curmudgeonly Liam's fixation about figuring out who sent the stupid email was just headache-inducing without her comments. Of course, Liam discovered it was Quinn and confronted her. Have to say her reaction was rather enjoyable - she essentially told him to stop trying to deflect and 'own' that he made the video and planned to keep it a secret from Hope.

Climbing mountains.
Well, the great Will debate turned into the great mountain-climbing debate by the end of the week at Brooke's house. A bit of foreshadowing that something is going to happen to Bill in Aspen, I'd say. Who else can see Katie and Brooke jockeying for position at his hospital bedside already?

Karaoke!
The story with Hope and Wyatt taking the buyers to Bikini Bar to sing karaoke had funny moments, close Wyatt and Hope moments, and downright cringe-y moments. What was your favorite "B&B" story this week? Vote in Soaps.com's poll:

Read Soaps.com’s Grey’s Anatomy Recap: Map Of You to find out what happened between Arizona and Leah.