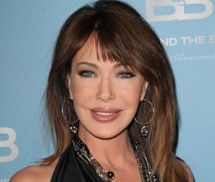 Hunter Tylo (ex-Taylor, “The Bold and the Beautiful”) has found herself caught up in a court case, according to The Wrap. Actress Holly Gagnier (ex-Cassie, “One Life To Live,” ex-Ivy, “Days of our Lives”) has been sued by her former ballet teacher, Patricia McCoy, who is claiming that Gagnier defamed and slandered her to Tylo’s manager in an effort to cause a deal to fall through in which Tylo would have starred in a film adaptation of McCoy’s book, The American Dream Has Put Our Souls To Sleep. Tylo is not actively involved in the suit herself.

Read about “B&B’s” Texas Battle’s Surprise For Street Performers. Get the scoop on who has a meltdown on Coronation Street.

The Bold And The Beautiful's Aaron...