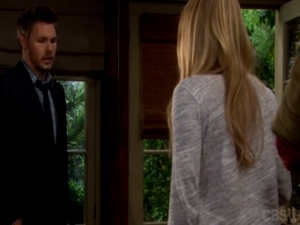 Despite the event at the Forrester boutique and a new engagement, the most exciting development at “The Bold and the Beautiful” came in the form of casting news this week. More on that in the weekly thoughts:

Breathless.
Well that was clearly quite a kiss between Hope and Wyatt in the cabin – the girl could hardly stand up afterward! The question that comes out of all this is why Liam would be so determined to win Hope back knowing she was making a mountain out of a molehill with the Steffy video, and then finding her kissing his brother with her engagement ring in her pocket mere hours after their disagreement? Shouldn’t marriage have seemed like a bit of a lost cause, or at least a bad idea by that point? The chemistry between Hope and Wyatt is strong and they’re more intriguing than her and Liam, who bring out the bland in one another, so let’s see where it goes and end the triangle business for a while.

A new hobby.
Comic relief this week came in the form of Brooke’s facial expression when she realized Bill wanted her to take up mountain-climbing. Of course she’ll do anything for her sexy man, so she rallied nicely, and after a brief thought for Katie, purred about how she couldn’t wait to climb with him. Climbing mountains is a good metaphor for overcoming the negative feelings toward their relationship as well. It will be interesting to see how long it will last. Especially when, hot on the heels of my complaint last week about Bill having no competition other than Eric, came the announcement that Thorsten Kaye was cast as Ridge Forrester. This development had me giggling like Hope in anticipation. Be sure to share your thoughts on this casting news in the comment section.

He has to know.
Despite the fact that Carter entered his relationship with Maya knowing full well she wasn't over Rick, one can't help but find her behavior toward her fiance somewhat reprehensible. She never should have accepted his marriage proposal, but since she did, she should show him some respect. Staring at Rick across the outdoor cafe, telling Dayzee she wants him back, tracking him down at a Forrester event, and letting herself into his home, all without the courtesy of being honest with Carter first, is a bit icky, and not helping to make her root-worthy from a viewer perspective.

A ride you'll never forget.
Even though Rick and Caroline tend to come across like a superficial sort of couple, it was very sweet how he re-created the scenario of the first time he saw her for his marriage proposal. Of course, the sweetness and light may be short-lived. As they made their way home, presumably for another ride Caroline wouldn't ever forget, they were shocked to find Maya laying in wait. What should Rick do? Vote:

Read Soaps.com’s Grey’s Anatomy Recap: I Bet It Stung to find out what happened with Alex and his father.