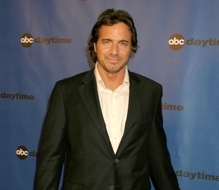 With Thorsten Kaye set to debut as Ridge Forrester later this week on Friday December 13, “B&B’s” headwriter, Bradley Bell, had this to say: “Thorsten’s powerful screen presence and vast range as an actor has intrigued me for years. The timing was right, so I took the opportunity to cast him in the role of Ridge Forrester. I’m confident Thorsten will make this role unique on every level.”

Veteran soap star, Thorsten Kaye, who played Zach Slater on “All My Children” and Dr. Patrick Thornhart on “One Life To Live,” has been cast in the role of Ridge Forrester on “The Bold and the Beautiful.” Kaye told TV Guide that he no longer has a contract with “AMC.”

He will first appear as Ridge on December 13. Kaye recently guest-starred in ex-“Y&R’s” Michelle Stafford’s web series The Stafford Project, episode six, The French Assassin, and previously appeared as Nick Felder on NBC’s “Smash.” Kaye’s latest project, a horror/thriller entitled, “Animal,” is in post-production, and tells the story of a group of friends who wind up trapped together in an isolated cabin fighting for their lives against a blood-thirsty predator.

What do you think about this casting? Let Soaps.com know by casting your vote:

Read Soap Stars in Beacon Hill the Series to get details on this new online project, which has cast numerous Daytime actors.

Follow Soaps.com on Twitter @soapoperafan and 'like' Soaps.com on Facebook to dish with us about "The Bold And The Beautiful," all the other soap operas, "Dallas," "Glee," "Grey’s Anatomy," "Pretty Little Liars," "Revenge," "Vampire Diaries," and "Venice The Series."