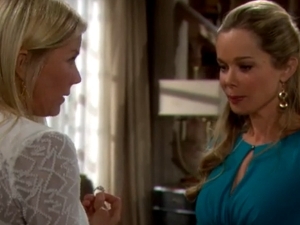 It would be so amazing if they could find a way to have more characters on the “B&B” canvas. The Oliver/Wyatt scenes were my favorite of the week, but also served as a reminder that we don’t get to see the likes of Oliver, Thorne, Justin, Marcus, Dayzee, Bridget, or Thomas nearly enough, not to mention those we miss that would be so interesting to have back full-time to round things out, like Nick or Felicia. It’s not believable for characters like Donna and Thorne not to have love lives, or for women like Quinn and Brooke to have no alternative to Bill other than Eric. There have been so many great characters introduced on “B&B” that it’s a shame for the focus to be so limited.

Behind-the-scenes.
The backstage scenes surrounding the fashion shows are really good because so many characters get to be involved. It’s always puzzling, though, to see who will show up and who will be missing. For example, why were Marcus and Dayzee not seen at this one? It’s also fun to have something underhanded going on behind-the-scenes, and this time was no exception. Instead of noshing on lemon bars with Pam, Quinn took time to check out the video on Liam’s tablet and then emailed it to herself…and later to Hope. Pretty questionable behavior, especially since it could come back to bite her (or Wyatt) when the accusations start flying.

Dumb Donna?
I love Donna, but how on earth is she okay with Brooke being engaged to Bill and keeping yet another secret from Katie! Yeesh. She even went so far as to say that what they have seems special. I’d much rather she snap out of it and have a really good go at Brooke – not that it would change anything, but so much more fun for us!

It’s all about us.
Rick and Caroline’s make-out sessions are one-third kissing and two-thirds talking about how great they are – haha! They do make a perfect match in this way, but it sure makes it hard to believe he had the deep feelings he professed to have had for Maya.

Swapping stories.
Loved the scenes with Oliver and Wyatt comparing notes on their doomed relationships with Hope! Seeing Wyatt react to Oliver's tales of tattoos and accidental sex with Hope's mother was so entertaining. Oliver always makes me grin - wish we would see him more often.

Brinn?
Also brewing on the buddy front is the burgeoning friendship between Brooke and Quinn. It's a nice switch to see Brooke have a woman friend who is not her sister, but why do we feel like it's only a matter of time before Brooke will poach a man from Quinn and make her into a rival?

Hope's dashed hopes.
Hope's reaction to Liam making a keepsake video for Steffy seemed pretty over the top. If she honestly believed that her hold on the guy was so precarious that Steffy could reappear and reclaim him at any time, then why was she planning to marry him? If she was totally secure in his love and loyalty there would be no need for any other reaction than to say that was nice of him, or perhaps minor irritation. The fact that she told Brooke she was up all night watching the video - just weird! Do you think Hope over-reacted to the video? Vote:

Cabin conversion.
Well, it looks like Hope will try her luck with one-woman man, Wyatt. They have a sweet vibe together, and he has eyes for only her. Of course, he hasn't met Steffy yet...

Boardroom banter.
Okay, so it wasn't quite banter between Katie and Bill at the board meeting. And maybe it did sound a bit like divorce court...or perhaps foreplay? Would anyone else like to see Katie steal her husband back from Brooke?

Read Soaps.com's Grey's Anatomy Recap: Puttin' On The Ritz to find out what Alex found out.