Big Brother’s Elissa Reilly To The Bold and the Beautiful 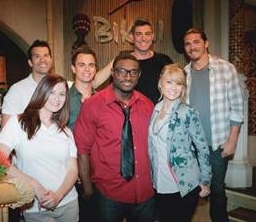 Elissa Reilly, who was voted America’s favorite player on the most recent season of “Big Brother,” will appear on “B&B” on October 24 and 25, according to TV Guide. Reilly, who will play a hostess at Bikini Bar, will join other reality TV stars appearing on those dates including her sister, Rachel Reilly, Brendon Villegas, Jeff Schroeder and Malcolm Freberg from “Survivor.” Also appearing from Reilly’s season will be Big Brother’s Howard Overby.

Get caught up on all of the soap opera casting news through Soaps.com’s Soap Opera Comings And Goings.

The Bold And The Beautiful Saturday Teaser Poll: Bad News

The Bold And The Beautiful Spoiler Video: Giving Up