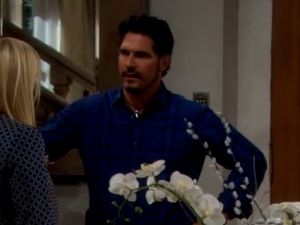 The show sailed along this week, although some of it was less appealing than previously. Some thoughts on the storylines:

Roommates for life.
This storyline with Maya becoming engaged to Carter is a fail. Not only has he consistently come across as pushy and creepy, but their ‘staged’ feeling interactions haven’t resonated with many viewers. These characters hadn’t even been dating or sleeping together – nothing at all has happened between them to warrant a proposal of marriage. Besides, Carter knows she’s in love with Rick. Beyond dumb.

Notice anything different?
Pam took off her pearls! Love these little nuggets of comedy lobbed into the drama. Pam’s always a kick.

Ranting about Katie.
After what Bill and Brooke did to Katie you’d think they’d be willing to take whatever they have coming to them, but Bill continues to rant and rave. He’s so indignant about Katie trying to piss him off. So funny how skewed Bill sees things.

Brotherly hug.
It’s definitely entertaining watching Wyatt push Liam’s buttons, but it might get old if Liam doesn’t start giving it back.

Cut all ties.
Wow, that was a new low for Liam; asking Hope to cut all business ties with Wyatt. It was also a low for Hope to go to Eric and actually try to back out of a business deal because her fiance was jealous. Of course randy ol' Eric wanted to keep Quinn around so he nixed the idea. For his part, Wyatt offered to end the deal when he found out what Hope did. Egad. So many people who can't separate their personal lives from business.

The marriage is ending.
Not buying Steffy signing annulment papers at all! As for Liam yammering at Bill to just accept it - Bill has been too concerned with his own affairs, he hasn't mentioned Steffy and Liam's marriage in eons. Bunk.

Family business.
Quinn was really getting around this week, what with meetings, and visits to Brooke and Eric. It's interesting that she mentioned being a realist, because she definitely seems to have purpose in everything she does. So, we know she made Stephanie's portrait fall down (hilarious!) by kissing Eric, but does she have a genuine interest in him, or is she just using him to ensure that the all-important contract (and Wyatt's tie to Hope) remains intact? What do you think? Vote below: