In this week’s Throwback Thursday Soaps.com takes readers back to 1991 when Blake Hayes first arrived in town…

Currently some unforeseen forces will put a damper on Liam and Hope’s wedding plans. Years ago, even though the wedding and marriage was over, that didn’t stop Blake from stalking his ex-wife Taylor. Viewers first saw Taylor’s much older ex-husband Blake after he and Taylor had divorced off-screen, due to a condition that made him violent. Blake couldn’t let go of Taylor and hid in the shadows of Los Angeles in an attempt to break up Taylor and Ridge. When Taylor realized he was in town, Blake assured his ex that he received treatment for the disorder. They made love for old times’ sake, but Blake was forced to face how much Taylor loved Ridge.

Blake tried to move on from Taylor and began an affair with Margo, who was married to Bill Spencer. During an altercation, Blake attacked Bill and was later suspected of doing the same to Ridge, who’d ended up in the hospital. Blake had enough of the drama and left town. However, after meeting a woman named Faith Roberts he came up with a new plan to get Taylor back and returned to LA with Faith by his side.

Do you remember who Faith really was? Vote below.

The Bold And The Beautiful Spoiler Video: Quinn's View 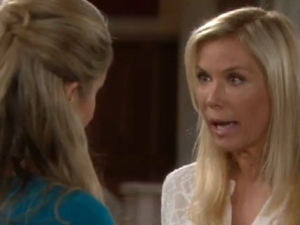