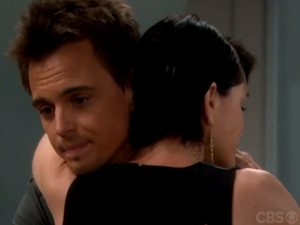 “B&B” kept up a good pace in light of the short week. Thoughts:

Lovelorn.
If Rick had something so special with Maya, why would he so easily fall back into a relationship with Caroline? Can’t these people ever be alone? Not that it really matters who Rick ends up with – kind of over it at this point. It’s disappointing that Caroline is willing to settle for being a consolation prize. As for Carter and Maya, it’s impossible to root for them to get together simply because him pushing himself on her constantly is just such a turn-off. He was at it again this week. She’s just not that into you! Yick.

Playing at being me.
Brooke and Bill spent their time this week complaining about Katie having too many supporters, having sex, and discussing Wyatt’s unexpected uprising. Brooke sure knows how to handle a man like Bill – stroke his ego (“Bill, Wyatt is just like you…”) to get him around to her way of thinking. Couldn’t believe she changed his ringtone to a stallion sound – too much!

Mommy and me.
It was nice to see Wyatt return home and give his mother some credit for having a valid viewpoint on Bill. In return, she decided to back him and Hope. So sweet.

Accessorize this.
Umm...why were Forrester executives Marcus and Thomas sourcing jewelry and accessories for HFTF? Aren't there stylist minions to do that? Also, wouldn't they have done that before the fashion show? Just asking.

Come with me.
The Wyatt/Liam/Hope triangle is managing to stay fresh and intriguing despite the fact that it's basically a re-do of Hope/Liam/Steffy. Hope is now the Liam, and Liam is the Hope...leaving Wyatt as the Steffy. The dynamic is very similar. Wyatt is particularly interesting right now as he is sporting a contrary attitude that renders him just a bit of a bad boy, while still being that sweet person we first saw pining for a romance with Hope. The Wyatt who was greedily eying up his piece of the Spencer pie wasn't nearly so appealing. Liam and Hope are comfortable, but Wyatt isn't ready to give up, and Hope clearly isn't ready to let Wyatt walk out of her life - she was positively thrilled to find an excuse to rush over to Quinn Jewelry to see him. Who should Hope choose? Let Soaps.com know by casting a vote:

Find out which actors were cast in 50 Shades of Grey and vote on it!