Also, vote in our Genoa City Throwback Thursday Y&R Poll: Lisa Traps Brad In A Cage and read Soaps.com's latest Venice The Series Recap to learn who fell victim to a hit and run.

In this week’s Throwback Thursday Soaps.com takes readers back to 1988 when Thorne Forrester retaliated against his brother Ridge…

These days, Thorne is upset over his father favoring his brother Rick at Forrester Creations. It’s not the first time Thorne has had issues with a brother. Thorne had been married to Caroline Spencer, who ended up having a bit too much to drink at a party one night. Ridge wanted to play a joke on Caroline and climbed into bed with her. Caroline took Ridge for Thorne and had sex with her brother-in-law.

Thorne couldn’t understand why Caroline had trouble being intimate with him during the days following her infidelity. It wasn’t until he overheard his mother and father discussing Ridge’s prank when Thorne lost it. Thorne, who was on painkillers at the time, hit the bottle pretty hard before he decided to pay Ridge back for what he’d done. After Thorne dealt with his brother, he passed out. Stephanie came upon the scene and was relieved when neither Thorne nor Ridge immediately recalled what had happened.

Do you remember what Thorne did to Ridge? Vote below.

The Bold And The Beautiful Spoiler Video: The Guy 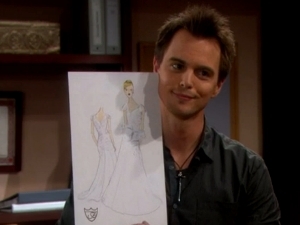