Moving in.
Well, it was no surprise that Hope agreed to move in with Liam and Wyatt - all the better to conduct a triangle in close proximity. The puzzler is that her all-important standards are being swept under the rug. Also, what happened to her being frigid and needing to take pills to enjoy sex?

Big secret.
The Rick/Caroline/Maya stuff is no longer appealing because it's become utterly predictable. Rick and Maya will split when he finds out the 'big secret', which is really not such a big deal, Rick will allow Caroline to comfort him, and creepy Carter will be all over Maya in a New York minute. Nothing appealing happening there at all.

Licking their chops.
By the end of Friday's episode, I felt certain that Thorne had been dusted off and brought out of the basement just to be made to look foolish. Here's hoping that's not the case, however, he and Thomas were definitely being made to look way too cocky - they were obviously being set up for a fall. Either the buyers thought Rick's line was so good they were stunned into silence, or Eric will announce some other way of moving forward. That's my guess. The fashion show itself wasn't bad. The models were gorgeous, but the clothes were very trendy and some missed the classic glamor of the past Forrester Creations fashion shows. What did you think of Rick's line and the fashion show? Vote:

Get up to speed on the 2013 Soap Opera Labor Day Pre-Empts. 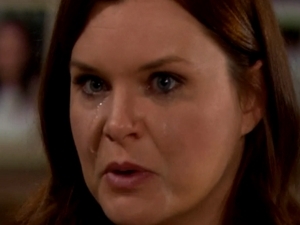 The high drama of the Katie/Brooke confrontation kicked the week off right, but things were more somber by week’s end. Thoughts:

You did this to me!
The way Katie went at Brooke and stood up to her repeatedly and unflinchingly as they argued was so satisfying to watch! Too bad she hadn’t done the same with Bill, whom she let tromp all over her. A fan commented that Brooke and Bill certainly don’t appear to be worried about upsetting Katie or sending her into cardiac arrest now. So true! Anyway, in no universe should Katie have allowed Bill to turn this around on her or put herself in the position to be pleading with him to come back to her. Gah! It seemed like both Brooke and Bill were coming from a place where they needed to find any way they could to blame Katie so that they could justify moving forward together.

Taming the stallion.
I believe Brooke loves her sister, but she might love ‘love’ a little bit more. She can’t seem to say no to being swept off her feet no matter who it hurts. She might as well ride the stallion all she wants now – the damage has been done. The question is how far will she go with this romance knowing that Katie still loves him?

Birthright.
Wyatt’s hunger to have what he feels he’s entitled to was a bit off-putting this week. That, and his rudeness toward his mother. He also wants ‘the woman’ into the bargain. Be careful what you wish for; some might say winding up with giggly Hope would be more punishment than reward for his bad behavior.

The Bold And The Beautiful Spoiler Video: In All My Years