I want to go back.
It was refreshing to see Katie stand up to Bill's strong personality and refuse to be a victim, so it was a bit disheartening to see her return to the tears and pleading for him to come back to her this week. It was also funny to see her taking relationship advice from Hope and Liam - that's desperation!

Monte Carlo.
I love that this soap still does shoots in exotic locales. There was no problem getting caught up in the romance of Bill chasing Brooke halfway across the world, kissing her passionately, and declaring his love. Would be hard to resist! But Brooke did resist, other than indulging in the kisses. Makes you wonder why she didn't have this kind of willpower when she slept with Bill and got pregnant. Why is she so much more concerned about Katie now? At any rate, if she ends up with Bill, at least she'll have made all the right noises about him 'hearing Katie out' first and so on. Did you get caught up in the romance of Brill in Monte Carlo? Let us know by voting below: 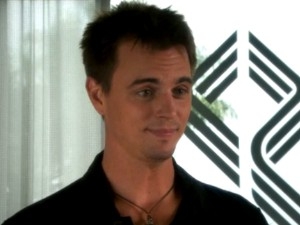 Plenty happening on “B&B” again this week; loved seeing the scenes in Monte Carlo. The show revolved mainly around the Maya/Rick and Bill/Katie/Brooke storylines. Thoughts:

Where were you last night?
I’ve lost interest in the Maya/Rick/Caroline triangle to an extent, though it’s hard to figure out exactly why. Perhaps it’s a tad predictable? I still like Rick with Maya, but don’t feel that interested in the goings on. As for Carter pursuing Maya, he just seems like a potential stalker. He’s just too pushy and creepy – saying he would have liked to have got in her bed, and then hanging around her apartment after she left – yuck!

Tofu-eating yoga boy.
It feels off that Liam is suddenly being depicted differently because the writers want to establish that Wyatt is more like Bill. Why be so obvious? In any case, Wyatt is definitely turning out to be different than he was when they first brought him on. I’m afraid he’s going to be a weasel-y character who won’t be very appealing.

The Bold And The Beautiful Saturday Teaser Poll: Moving Day