The Bold and the Beautiful’s Patrick Duffy in New Role! 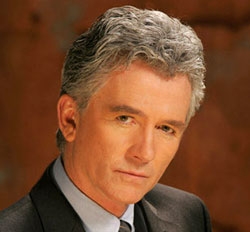 Patrick Duffy (Stephen, B&B) will appear in the Hallmark Channel movie, “Love Takes Wing” on April 4. Patrick portrays Mayor Evans in the movie, which is part of the film series based on the “Love Comes Softly” novels by Janette Oke.

“Love Takes Wing” is about a widow who comes to the small town of Sikeston to become their town doctor. Not only must she deal with the unknown illness the town has fallen victim to, but she must also cope with the residents’ disdain over having a woman as a doctor.

Soaps.com congratulates Patrick on his new role and hopes to see him as the Logan patriarch on B&B again soon.

The Bold and the Beautiful's Jack...

The Bold and the Beautiful's Dan...