Not his girl.
So, Hope won't move in with Liam before they're married, but will come over for dinner and go have sex with him in the bedroom while his new half-brother awkwardly paces the living room? Alrighty then. Hope ordering Liam to go to Paris and get Steffy to sign an annulment was laughable. Why would she even have been under the impression that an annulment was going to happen? She quite clearly knows where Steffy stands on that subject. Also, what the hell is her rush? With all that's happened, you'd think she'd want to be cautious! So basically, Wyatt now has six months to work his magic on Hope because let's face it, Liam may have had the nerve to sucker punch his brother, but he sure doesn't have what it takes to confront Steffy in Paris and win.

Dream on the line.
While the Caroline/Rick/Maya stuff has lost it's luster, the idea of some business intrigue is still appealing. I'm not sure what to make of Thorne and Thomas as a dynamic duo, but it sure beats Thorne being stuck in the basement. Front burner that man! As for Caroline and her latest scheme - being herself, aka, bribe Rick into going away for a weekend so she can seduce him - it's time for them to decide who Caroline is. She's too all over the place personality-wise. One minute she's a dim-witted squealing airhead, and the next an educated, worldly talented woman. Anyway, would you like to see her help Rick retain his presidency or is it time for Thorne and Thomas to be given a chance? Vote below: 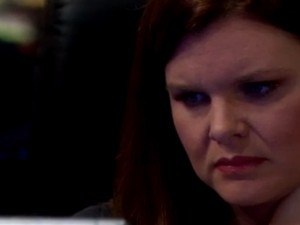 “B&B” continues to bring the entertainment and variety. Read and then vote:

Hostility.
Brooke chastised Hope for setting Quinn up, saying she could understand her hostility. Will wonders never cease? Of course that was but a blip in the latest round of wedding planning. It’s almost good that Hope never quite makes it to the altar – what will the girl have to strive for or talk about once she ties the knot?

One sneaky sister.
It was very good that Katie called Donna out for keeping Brooke’s secret, but also that she acknowledged she was in an impossible situation. Did anyone else find it weird that Brooke was the one to tell Katie about Wyatt? It should have been Bill! Not that Brooke really gave him a chance. In any case, it was a hoot seeing Katie spying over the nanny cam and trying to shut it off when Donna came in. Funny!

Red meat.
So Wyatt is supposed to be more like Bill, and Liam’s a more gentle soul. This was a bit of a surprise as Wyatt had been coming across previously like he was going to be a male version of Hope, with the fairytale kisses and such. Anyway, it looks like battle lines will be drawn between the new half-siblings. It will be interesting to see if Bill will side with newbie, Wyatt, and what he’ll have to say about the hullabaloo over Hope. It was a kick to see Wyatt looking stuff up and getting the 411 on the Liam/Hope/Steffy triangle.

The Bold And The Beautiful Spoiler Video: Controlling Us

The Bold And The Beautiful Saturday Teaser Poll: Proposition