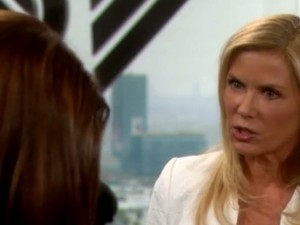 Life starts now.
It seemed surprising that Hope accepted Liam’s proposal and slept with him while he was still married. Not only that, but they had sex in the cabin where he had previously shared an intimate time with Steffy. Doesn’t sound like a fairytale beginning – she must be over things being perfect. That said, the whole thing is beyond dumb. The guy has to propose/get married every time he switches relationships? Gah…

Agenda.
It’s very admirable how Karen has backed Katie, but she may wish she hadn’t got involved if Katie changes her mind and reconciles with Bill.

You have to stop!
Katie set Brooke straight before turfing her out of her office, but no one made more sense than Donna when she called Brooke out for defending Bill. It’s downright bizarre that Brooke would go from anxiety attacks over what she’d done to Katie, to yelling in Katie’s face about what she is doing to Bill. Not too worried about Katie’s ticker now! One almost wonders if Brooke’s not sub-consciously hating on her sister a little bit because Bill is pursuing her and treating Brooke like a distant memory.

Not impressed.
Luckily for Liam, Bill had too many problems of his own to get too lathered up over his latest engagement to Hope. He’s bound to get more excitable, however, when he finds out Wyatt’s got a thing for her too. Can’t wait to see what he does with that information!

Guinea pigs.
There was a nice payoff in the 'Room 8' storyline what with Maya realizing Caroline was behind the steamier scripts and, thanks to Pam's brainwave, Rick showed up just in time to get the scoop as well. Caroline got her comeuppance via the rodents and waterbed, which was hilarious. It must be time for Caroline to move in another guy's direction now. It might have been interesting to see her go head-to-head with Hope over Wyatt, but alas, she and Wyatt are cousins. Who to pursue?

She done left me.
Poor Eric. Who else thinks Taylor made a beeline for Ridge and Steffy over in Paris?

Are you going to earn a badge for this?
Love Quinn! Excellent scenes with her and Hope having it out. There's nothing more annoying than a do-gooder who thinks she knows what's best for everyone (even if she's right), so it was satisfying to hear Quinn give Hope a little dose of real talk. Looking forward to some Quinn/Brooke run-ins in the future.

Welcome to the family.
The scenes with Wyatt, Liam, and Bill were tinged with emotion, but also funny. Bill comparing him and his two sons to the Cartwrights and Liam and Wyatt not having a clue what he was talking about - hilarious. Liam and Bill (so often at odds) tag-teaming Wyatt to let them go camping with him. So good. Looks like they'll have to deal with Quinn, however, before they can head out to the great outdoors. Let's hope they go and Wyatt tells the story of how he met Hope while they sit around the campfire. Weee!

With the addition of Quinn into the mix, Bill now has plenty of women to choose from. Who would you like to see him paired with? Vote!

The Bold And The Beautiful Brings...

‘Grey’s Anatomy’s Giacomo Gianniotti Teases Merluca’s Future: ‘There’s A Lot Of Making Up To Do’

On ‘The Office,’ Steve Carell and the Dunder Mifflin Gang Call a Panorama City Studio Home