Ex-B&B’s Mackenzie Mauzy To Into The Woods

Actress Mackenzie Mauzy will play Rapunzel in Rob Marshall's upcoming film, "Into The Woods." The dark musical tells the story of a witch who teaches lessons to various popular children's characters including Little Red Riding Hood, Cinderella, Jack and the Beanstalk and Rapunzel.

Mauzy joins big names such as Johnny Depp ("The Lone Ranger," "Pirates of the Caribbean") who drops in to play the bit role of the wolf, Anna Kendrick ("Pitch Perfect") as Cinderella, Chris Pine ("Star Trek: Into Darkness") as Cinderella's prince, Christine Baranski ("Mama Mia," "The Good Wife") as Cinderella's stepmother, Emily Blunt ("The Five Year Engagement") as the baker's wife, and Meryl Streep ("Hope Springs," "The Bridges of Madison County") as the witch. Replacing Jake Gyllenhaal ("Donnie Darko") as Rapunzel's prince is Billy Magnussen (ex-Casey Hughes, "As The World Turns"). The film is currently in production and the expected release date is December 2014.

Get a first look at ex-“B&B’s” Mackenzie Mauzy as Rapunzel in the Disney feature film “Into The Woods” by watching the official trailer below:

The Bold And The Beautiful Spoiler Video: Past This 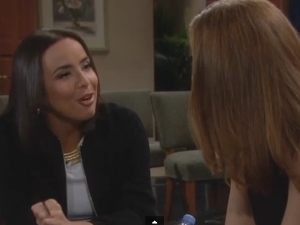